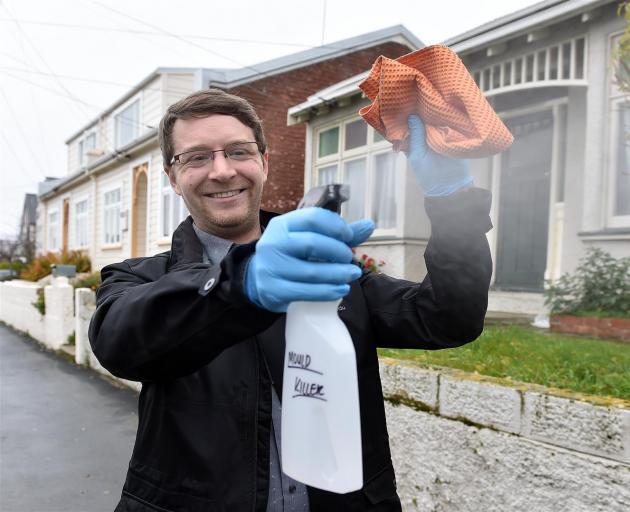 OUSA student support manager Sage Burke says the group is providing free mould-killing solution, comprosed of white vinegar and water, for students. Photo: Peter McIntosh
The plight of students whose flat was so affected by black mould that it was even in their clothes is ''very common'', the Otago University Students' Association claims, but a group representing landlords in the region is placing blame with tenants.

Nine female students have reached a confidential settlement with their landlord, after making a complaint to the Tenancy Tribunal about conditions in their Dunedin flat which a doctor said caused one of them to develop asthma.

Stuff reported the students' lawyer earlier wrote a submission seeking more than $100,000 from their landlord. A building inspector found there was a significant risk toxic mould Stachybotrys could be present in the walls of the house, and the students' lawyer noted conditions were so bad protective equipment had to be worn by people entering the flat.

The house was not weathertight and water leaking from the flat bathroom made the situation worse.

OUSA student support manager Sage Burke said about 75% of students said they had mould in their flats and the issue was so common OUSA had developed a mould-killer solution it distributed to students.

OUSA could also test the air in a flat for humidity, but students should not be having to do that, he said.

''To rent a property it's a very large amount of money. If you are paying $20,000 a year for something, you expect it to be top quality,'' he said.

''The amount of cold and damp and mouldy rental properties that we see is absolutely phenomenal and it's absolutely unacceptable.''

Repairs not being carried out was a major problem and a lack of basic maintenance could cause mould to develop or make it worse.

The worst flats Mr Burke had seen included one with a floor made of shipping pallets, and another with a 2cm gap at the top of the window. He had also heard stories of a flat so humid ''clouds formed inside''.

There were some ''very good'' landlords in Dunedin. However, there were bad landlords who owned several properties and whose tenants might all complain during the year, he said.

Otago Property Investors' Association president Cliff Seque said generally, as long as a flat was well maintained, mould was due to the lifestyle of the tenants, including such things as drying clothes inside, not opening curtains and not airing out their homes.

However, if there were unresolved problems such as leaking pipes or homes not being weathertight, they could cause mould to grow.

It was not necessary to hire specialists to get rid of mould, and he agreed the problem could be fixed with a mixture of 70% vinegar, 30% hot water and some ''elbow grease''.

And this is the product of our society - don't we have a bright future ahead of us with these future leaders not knowing the basics such as cleaning. Sure some of those flats are hideous. Maybe if parents were able to parent and teach children how to look after themselves we might have a brighter future, the planet is broken. Instead of cleaning we will go the landlord for $100,000, make him or her broke and still not know to look after themselves. totally disgusted.

This is not about cleaning its about mould. Renters need to be told about opening windows to air the place, but if property managers or owners don't pay it any attention it will continue to get worse. I met one physio student who could not leave the windows open as there was no security catch and her clothes were full of mould.

When I lived in my house I didn't have security catchs on my windows and it was never an issue.
The first year my renters let the place go mouldy, I was given the same excuse by both Agent and tennant.
I fitted security catchs and it made no difference. Windows remained closed. Clothes hourse returned even though there was a clothes drier on hand and a good clothes line outside.
Conclusion:- Agents are toothless. Renters either don't care or with some, its pure malevolence.
Either way there is always an excuse why it's someone elses fault, and not their doing.

When I was a youngish traveler around the world for a number of years, I occasionally lived in squats that were far less unhealthy than the houses people pay good money for here. The state of some NZ rental properties is of near third world standard while being rented out at first world prices. Of course there are good and bad tenants, and good and bad landlords, and much of the problem is systemic. Housing issues need to be properly addressed in this country if the 21st century - for all its great technologies - is to be any better for many than 19th century slums. Or are we just in a race to the bottom, while traveling backwards?

I have provided rental accommodation to Dunedin students over the past ten years.
The property was my family home where I raised my children during which time considerable improvements were made.
It has always been managed by an agent.
Every year I have asked that no clothes horses be used to dry washing, that windows be open daily when the rooms are not occupied, that the bathroom and toilet be cleaned regularly.
At the end of each tenancy I need to wash all the curtains and windows for mould.
The urine and soap scum needs to be scrapped out.
Clothes horses get dumped.
My conclusion: - Poor environment inside the house is self-inflected and Rental Agents are a waste of time and money.
Political pandering to incompetence out of some misguided sense of social justice is the biggest health hazard in NZ.

My partner and I have thrown in the towel on being Landlords. Our rental property is a 1960s brick house that was water tight and warm enough when my partner lived in it 6 years ago. In come tenants that don t look after the place and won t use a heater or even the DVS system in winter and supposedly its now a health hazard. Sure there are probably a few unhealthy flats in Dunedin but a lot of tenants need to look at their behaviour.

Most home owners, since they are the ones who have to pay the maintence bills, work out that moisture in a building is its worst enemy. Most heat pumps also dehumidify and also have a ‘fan only’ option which will circulate the air inside a building and push it outside open windows on a fine day. Both dehumidifying and air exchange and circulation need to be carried out regularly by the person living in the house to stop the moisture build up and the resulting unhealthy conditions. Trying to penalise landlords when tenants neglect to do this is unfair and going to prompt landlords to invest their money elsewhere.

I live next to an old house upgraded, with insulation, heat pumps and good quality drapes. Last year there were senior law students who rubbished the place, other years students look after it. The key to success is property managers who do their job properly and owners who make sure they do. They are dealing with children after all and they need supervision even after the best parenting.