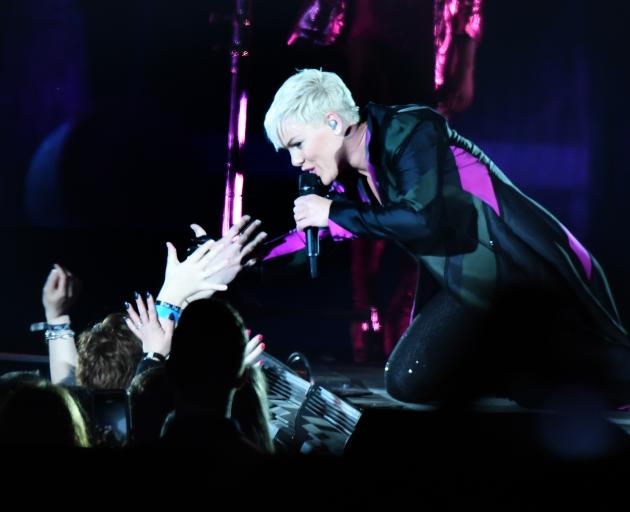 Pink performs at Forsyth Barr Stadium last night. Photo: Stephen Jaquiery
A Dunedin mother-of-three's first date night with her partner in almost three years was ruined after the Pink tickets she had bought in person from a brother and sister duo turned out to be fake.

Tania Marshall is now warning people to buy tickets only from authorised ticketing sites after she was left $250 out of pocket.

It comes after Hanmer Springs mum Donna Knight told how she travelled five hours with her extremely excited daughters to attend the Pink concert in Dunedin before realising she had been scammed despite paying $270 for tickets she never received.

Her daughters will now get to go Pink after Stuff reported a Tauranga businessman had offered to pay for their flights and tickets to Friday night's concert in Auckland.

The Dunedin mum also made a last minute decision to buy tickets to Pink's concert at Forsyth Barr Stadium on Saturday night.

Marshall saw someone was selling two tickets for the show on the Milton Buy, Sell, Trade page and got in touch on Friday.

The man's sister was travelling from Alexandra and said she could meet her that night.

They contacted her at the last minute to say they had forgotten the tickets.

Marshall eventually met them at the Tahuna camping ground on Saturday afternoon where she exchanged $250 for the two tickets, which she believed to be real.

"I assumed because I actually met with these people face-to-face and got the tickets handed to me and looked at the tickets and they look real and I fully thought I couldn't be scammed. I didn't think it would happen that way."

Marshall and her partner arrived at the concert with their tickets later that night only for them to be rejected when they were scanned.

"We were told they didn't exist. I had a wee cry as you would."

Marshall said she was really upset and was still trying to get her head around what had happened when a man who had been trying to sell his ticket offered it to her for free.

She eventually took it from him, giving the man a big hug, but went into the show on her own leaving her husband waiting in the car.

"I felt really sorry for him (partner) as you would imagine, he was left outside so I ended up only watching a wee bit and going out.

"It was our first time to go out in a very long time - we have three children at home. It's near on impossible to come up with the money."

She said despite the generosity of the stranger who gave her a ticket, their date night was still ruined. 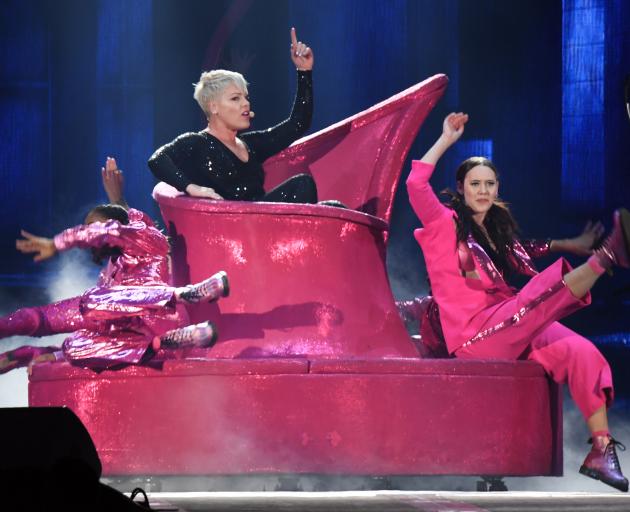 Pink performs on her intricate set. Photo: Stephen Jaquiery
However, when she asked them for the details of the people they purchased the tickets from so she could hand the information to police, they declined.

"They said find it yourself, track it through the ticket. But as you would imagine because they are fake, anything fake is going to have no evidence or way to track them anyway."

Marshall said she had now lost faith in humanity and warned people to buy tickets only from authorised ticketing agencies.

"I would say never ever buy off anyone who is not Ticketmaster. Don't ever trust anyone - not even Trade Me."

A police spokesperson said people were advised to only buy goods including event tickets off official vendors.

Goods should only be purchased from reputable trading businesses with identity confirmation to a level they were satisfied with and money should not be transferred into another account without verifying who the person is and that the items reportedly for sale are genuine, they said.

"It's not hard and you may regret not taking that little bit more time. If an offer seems too good to be true, it often is."

Anyone who believed they were a victim of crime, in person or online, should report the matter to their local police.