Museum has a challenge from the deep 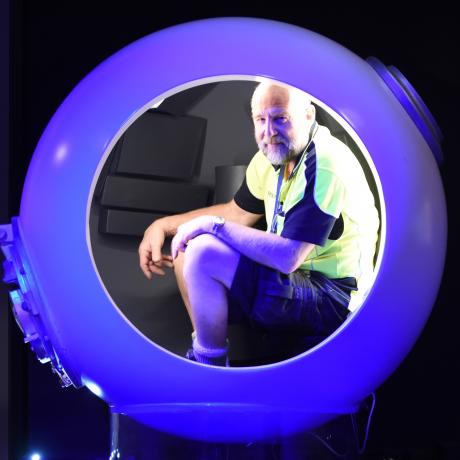 The machine photographed is a 109cm-diameter replica of the one used by the Oscar-winning movie maker to explore some of the deepest spots in the world's oceans - but the diameter of the real thing is 12cm smaller.

The vessel, built to withstand pressure of 125 tonnes per square centimetre, is one of the artefacts on display in the "James Cameron - Challenging The Deep" exhibition, which opens at Otago Museum on Sunday.

The exhibition, which has just finished a successful run in Sydney, brings together items from Cameron's many deep sea diving expeditions, most notably his exploration of the wreck of Titanic.

Challenging The Deep includes a range of Titanic props and a 1:20 scale replica of half of the wreck.

Mr Gibson said preparations for the exhibition had taken nine weeks, including five weeks to unpack four shipping containers of material and place it.

"The objects from Fox Studio which were used as props in Titanic are really well done, they are very well made and they looked into what they had to do to get it right.

"The Titanic stuff is only a small part of the exhibition though; his passion is exploration and when I saw the show in Sydney that was what really got me, and it shines well and truly."

Museum marketing manager Hannah Molloy said a wide of extra activities were planned to go alongside the show, which included speeches from marine scientists and a visit to Dunedin next week by Tangaroa, the National Institute of Water and Atmospheric Research research vessel, which includes a rare open day tomorrow.

"It is a paid entry exhibition, but we have ticket prices as low as possible," Ms Molloy said.

The exhibition will be on show until February 9, after which it will travel to England.

Ms Molloy said the museum hoped Cameron, who owns property in the Wairarapa, might visit Dunedin to see his show.

"Not this weekend sadly.

"We are in conversation with his team, but he has a lot going on ... If he can get here we will be absolutely delighted to have him."