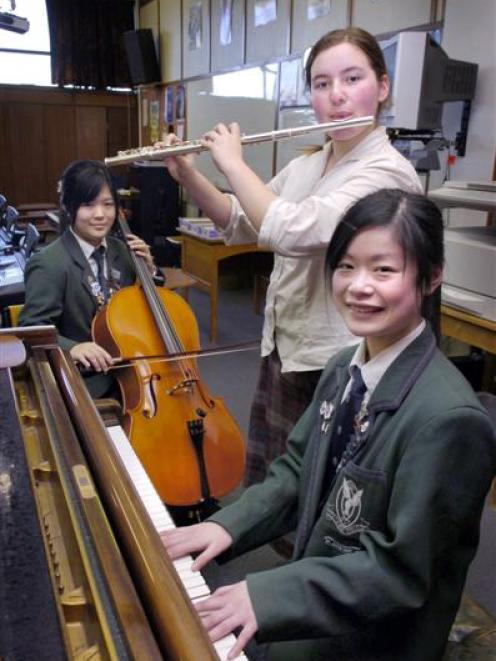 Five years later, the Japanese 18-year-old has developed a firm grasp of the Kiwi vernacular and has bowed her way to a string of successes playing the cello.

Since her arrival, she has been a member of the winning ensembles at the New Zealand Secondary Schools Chamber Music competition in Dunedin in 2005, 2006 and 2007.

This year, she teamed up with Logan Park High School flautist Natasha Dwan (16) and Columba College pianist Asayo Takada (19) in Trio Boulanger to win the competition for the fourth year in a row.

The trio members come from diverse backgrounds, but music is their shared passion.

For them, music is more than just entertainment - it has made Asayo and Nanae feel at home in a foreign land and it has helped all three forge life-long friendships.

Nanae, a native of Osaka, Japan has been playing the cello since she was 3.

She is from a musical family - her mother and sister play violin, and her father plays viola.

In order to make a family string quartet, Nanae was encouraged to play the cello.

That is no mean feat when you consider the instrument is about three times as big as the average 3-year-old.

Fortunately, her early lessons were made possible by playing a "one-eighth" size cello.

She loves playing the instrument now, but she did not recall her lessons as a preschooler with fondness.

"I didn't have a choice about whether I played a musical instrument or not. My mum used to bribe me with chocolate to do my lessons.

"But I'm so glad my parents encouraged me to play. My English was really bad when I came to New Zealand.

"When people asked me what my name was, I just said `hello' because I didn't understand.

"Music has helped me to develop my English skills and it has also allowed me to make friends - really good friends."

She is the daughter of Southern Sinfonia principal violinist Sydney Manowitz and first violinist Beverly Dwan.

Growing up in a household with high-profile musicians has meant it was a natural progression for her to learn a musical instrument, too.

But unlike her parents, she plays trumpet, sings and her musical forte for the past six years has been the flute.

She and Nanae were members last year of the Zwickau Quintet which won the Dunedin final and went on to represent Otago in the national final.

Asayo also had a part to play in the quintet's success.

She was a page-turner for the ensemble's pianist, Emma Hutton.

When asked how she felt about being a performer in the winning ensemble this year, she simply said: "I'm moving up in the world".

Asayo's introduction to the piano was unusual by New Zealand standards.

She has been playing since she was 5 but, unlike Nanae and Natasha, she does not come from a musical family.

"In Japan, parents are very proud of their children. It's like a competition between parents. My dad encouraged me to learn piano to show his daughter was as good as his friends' daughters."

It is clear Nanae and Natasha have a secret recipe for success in the competition.

"Every year is really difficult to win," Nanae says. "Choosing the right music is important. Finding trio music for flute, cello and piano is hard - it took me two months to find the right piece for us to play.

"Choosing the right people for the group is also important."

Surprisingly, all three members agree it is not necessary to rehearse for long hours.

"If you do, you get sick of the music, and the people you are playing with," Nanae says with a cheeky smile aimed at her pouting fellow musicians.

Nanae says there are other "trade secrets", but she is not about to share them with the world.

"If I told you those, I would have to stick a piano in your mouth."

This time, there is no smile with her witty comment.

One thing is for sure, winning was exciting for all three.

Asayo said it was the first time she had won a major music competition and it was "a dream come true".

For Natasha, winning the competition for the second time was just as exciting.

So much work and dedication went into their performance and the reward was fitting, she said.

But for Nanae, winning her fourth competition had left her with mixed emotions.

This year's performance was her last in the competition.

Next year, she plans to study engineering at university.

"I'm glad it's over now because I don't have to sit down and work out what we will play the next time. But in a way, I'm also sad it's all over now."

The trio are now waiting to hear from the judging panel if they have been selected as one of eight ensembles to compete in this year's national final in Auckland on August 9.