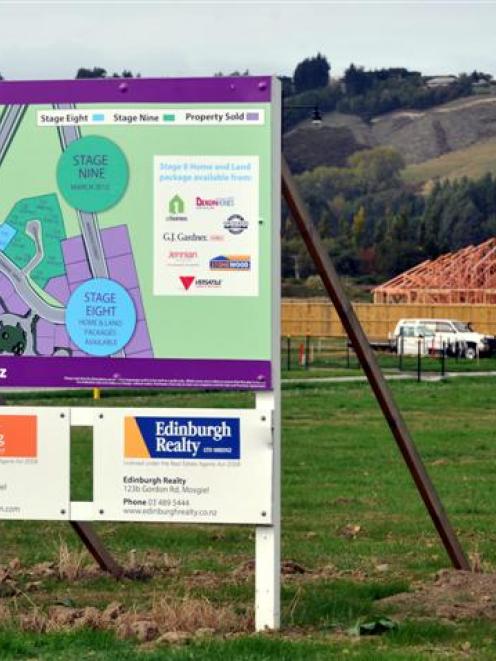 DCC to consider bringing forward planned roading. Photo by Gregor Richardson.
Mosgiel's Highland Park subdivision is racing ahead of schedule as an influx of new residents to Dunedin helps fuel demand for homes.

The unexpected pace of development has left developer Syd Brown feeling ''very happy'', and prompted the Dunedin City Council to consider bringing forward $110,000 in roading improvements planned for the area.

Mr Brown - a former Dunedin city councillor - said the development had jumped well ahead of schedule, helped by a fine summer and an increase in buyers from outside the city.

The development initially attracted an even split of buyers from within Mosgiel, other parts of Dunedin and newcomers to the city.

That balance had shifted more recently, with 40% of buyers now coming from outside the city, he said.

The Otago Daily Times reported this week annual net migration to Dunedin had increased from 128 in the year to February last year to 659 this February, and Mr Brown said he was ''certainly seeing the effects of that''.

So far, about 90 new homes had been built in seven stages, and construction was under way on another 45 homes - spread across another two stages - after they also ''completely sold out'', he said.

The rapid progress meant he was about four stages, and 40 homes, ahead of where he had expected to be by now.

''It's just taken off on me. It's just been unbelievable,'' Mr Brown said.

The pace of development has also prompted the council to consider bringing forward planned roading improvements in the area by a year, from 2015-16 to 2014-15.

Council transportation group manager Gene Ollerenshaw, in a report, said the subdivision was placing ''significant demands'' on the southern side of Factory Rd, Wingatui Rd south of Factory Rd, and the intersection between the two.

Mr Brown had asked for roading improvements to be brought forward, to coincide with construction of the entrance to his subdivision, Mr Ollerenshaw said.

The work was included in the council's 2007 ''structure plan'' for Mosgiel East, which identified transportation projects in consultation with developers, Mr Ollerenshaw said.

The cost of the improvements was ultimately covered by development contributions collected by the council from developers across the city.

Mr Ollerenshaw's report, which recommended bringing forward the spending, would be considered at a meeting of the council's infrastructure services committee tomorrow.