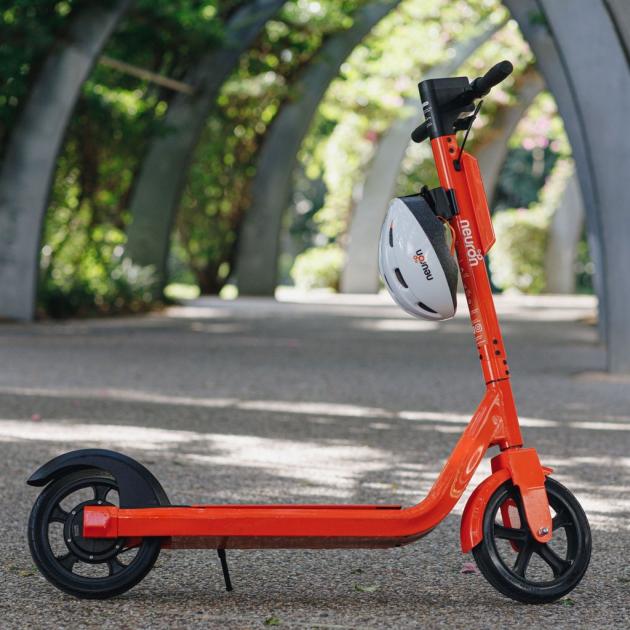 Dunedin will be the second city in New Zealand after Auckland to have Neuron Mobility e-scooters for hire. PHOTO: SUPPLIED
The battle for Dunedin’s footpaths is about to get zestier as a Lime competitor brings orange electric scooters to the city.

Neuron Mobility, which operates in Auckland and Australian cities such as Brisbane and Adelaide, is set to start its Dunedin e-scooter hire service early next month.

Both Neuron and Lime have been granted six-month permits by the Dunedin City Council to provide up to 250 scooters each from the start of this year.

Lime is understood to have run between 400 and 600 scooters in Dunedin previously.

Safety features for the Neuron scooters include integrated helmets.

The company is advertising for drivers, patrollers and mechanics to ensure its scooters are charged and in the right places.

The city council started tightening up on the e-scooter market last year amid concerns scooters were being parked in ways that were hazardous to pedestrians.

It passed a bylaw in October that covered various street activities, such as busking and the use of tables and chairs on footpaths.

Under the bylaw, e-scooter companies had to obtain a permit and abide by a code of practice.

From July, companies may be charged a fee to operate on Dunedin streets, if that is what councillors decide in April or May this year.

Dunedin will be the second city in New Zealand to host Neuron scooters, after Auckland.

The company was founded in Singapore in 2016.

"E-scooters are a great way for locals and tourists to travel in a safe, convenient and fun way," he said.

Great, more crap on the footpaths. DCC have taken far too long to take any action at all in regards to how the Limes were left laying around the streets and footpaths, now here we are letting more of them litter the streets. Don't get me wrong, a great idea, just very poorly executed. The public using them are also a great part of the problem, they just drop them where ever they like with no regard to other users of the footpaths. They too should be fined for 'littering' or 'deliberate obstruction' causing danger, then that money donated to the blind foundation etc.

Buzz. Agree++ Why is the council not listening to pathway users?

Shared helmets - can't think of a better way to spread headlice. The scooters do look to have larger wheels, a good thing for stability and safety on our often uneven footpaths. We'll see how the continued public experiment plays out, I guess.

As an aside, why is it even a question that the operators should pay some sort of fee for their use of our public footpaths and streets? This should have been the case from day one!

nothing wrong with scooters but doesn't the idea of a communal helmet during a worldwide pandemic seem a little foolhardy?

They cannot be used on the road's.. certainly not on our pathways ban them before someone get's injured.