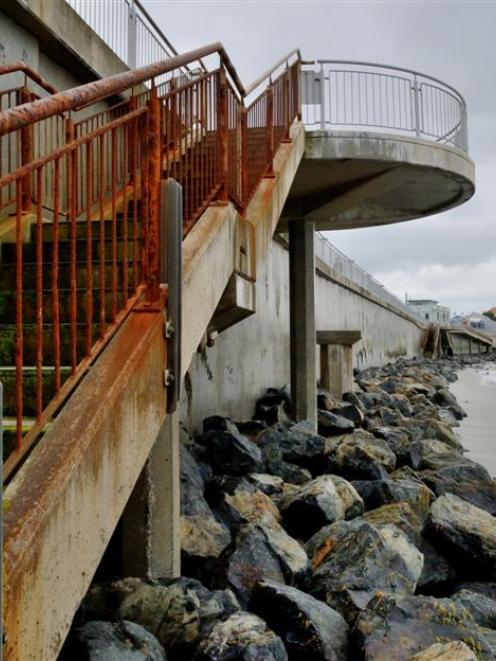 However, the decision at yesterday's Dunedin City Council infrastructure services committee meeting came only after fresh questions were raised about legal action over the failures of the existing wall.

Councillors were debating a staff report which recommended a new management plan to maintain the existing wall, at a cost of $850,000 over the next decade.

That would replace the need to spend up to $8.7 million on a groyne or other improvements to protect the area, following the appearance of sinkholes behind the wall in the past two years.

Councillors voted to endorse the new plan, although Cr Lee Vandervis asked whether there was any scope for legal action against contractors responsible for the existing wall's failures.

He had been told contractors had failed to properly secure the wall's foundation to bedrock, leaving the toe vulnerable to being exposed - and the area behind it undermined - when sand was stripped from the beach.

Council infrastructure and networks general manager Tony Avery said legal action had been considered two years ago, but ruled out in favour of a settlement with the parties involved.

His understanding was the problem was in part due to the varying depth of bedrock, which dropped away to an unknown depth in places.

Because of that, some parts of the wall were secured to bedrock, but other parts were not, although the structural integrity of the wall's panels was ''fine'', he said.

The report to yesterday's meeting, by council transportation policy engineer Jon Visser, said engineers' advice was the wall could continue to protect the area as long as the toe of the wall was not exposed.

The asset management plan would achieve that through proactive monitoring, maintenance and interventions where necessary, he said.

That included stockpiling $160,000 of new plastic, non-corrosive sheet-piling to install when needed to protect the toe of the wall, he said.

The old features had ''clearly ... not stood the test of time'', but there would be a need for ongoing maintenance in the area.

''It is a hostile environment,'' he said.

Maintenance funding would be considered at next year's long-term plan budget hearings.