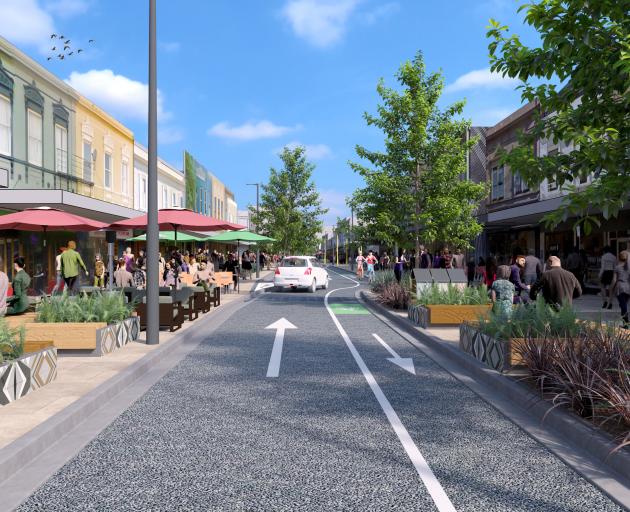 The Dunedin City Council’s preliminary concept design for a one-way southbound George St aims to give increased priority to pedestrians and cyclists. IMAGE: DUNEDIN CITY COUNCIL
Much of Dunedin's main street would become one-way under preliminary designs for a major makeover.

As part of a planned $60 million upgrade of the central city, the Dunedin City Council has unveiled its preliminary concept design for George St from Moray Pl to Albany St.

A two-way "slow street" environment would be created in the block between Frederick St and Albany St to allow for north-moving traffic and buses.

Parklets, native trees and plants, street furniture, public art and smart technology would be placed along the street to make the area a more attractive place to visit.

About 25 parking spaces for mobility card holders, delivery vehicles and drop-offs are included in the plan.

Any further car parking would be considered as part of a proposed car parking study which would be run alongside other studies such as economic assessment and environmental survey.

The design was created using the global street design guide adopted by the council last year, as well as feedback from public engagement workshops and surveys held earlier this year.

In their report, council urban designer Kathryn Ward and transport group manager Richard Saunders said the aim of the design was to increase vibrancy, improve safety and accessibility and to generally enhance the overall experience of the street.

The design will be presented to councillors at the planning and environment committee meeting on Tuesday.

If they vote to endorse the plan, a more detailed design, which includes traffic modelling, baseline data collection and the confirmation of an activity plan for area, will be created.

"It is important we get this right because it is our main street and it is the best main street in the country," Cr Benson-Pope said.

The design was not just about improving the look and feel of the street. It was also about encouraging and incentivising more people to visit and live in the area, he said.

He believed parking issues would be addressed in the planned study and there were already enough spaces in the surrounding area to meet demand.

As it was just a preliminary design, there would still be more chances for community consultation.

"This is by no means a final design, but what it will hopefully do is create a discussion about what Dunedin people want their main street to look and feel like."

Otago Chamber of Commerce chief executive Dougal McGowan said it was an exciting design which would allow business owners and the public to start visualising what the city centre could look like.

It was clear from the surveys there was a mandate for change, but there still needed to be further engagement with retailers and building owners.

"It's about how we create a destination where people come and they want to stay and do their shopping, have a coffee, but also have an experience which they want to keep coming back to," Mr McGowan said.

A weekend shut-off during summer months makes more sense- weatherwise and hence patronage. The plan is just another step to removing all carparks from CBD streets and force support for the DCC's loss making bus service.

Big Dave knew this idiotic idea was in the pipeline it would not surprise me if it's one of the reasons he's decided to do the right thing and hit the road .

Benson-Pope states
"He believed parking issues would be addressed in the planned study and there were already enough spaces in the surrounding area to meet demand."

It quite obvious by this statement that he is away in La La land , there is in my experience NOT enough parking in the area and with the hospital build there will be LESS ,and that's not taking into account the parking thats been lost with the bus hub and cycleways etc, idiots like Pope need to get out in the real world , lets vote him out.
As for the supposed traffic modeling I hope it improves from the gridlock we have now,
Who ever does the traffic management now needs to come and drive round the town to see how badly it is being controlled.

There's never been anything wrong with George St, and the flow of traffic in both directions, that negatively affect the businesses on George Street.
If the incentives for this proposal are to encourage tourists or people to move here, what about the needs of those Dunedin residents already living here?
Or that this leads to an increase of more footwalk in this area, well there's still traffic coming down it. What about Dunedin people that live or choose to shop in other areas? Or where does the housing magically appear from, for a city that already has a housing shortage?
Then surrounding streets in this area are expected to cope with the extra flow of traffic. All those deliveries that are to be made to those businesses, are going to increase those drivers workloads, and delivery times.
Bus users, are going to have an extra walk. Not easy if they're elderly, or Mums with young kids, who don't drive. How does the new bus services cope with this change too?
Dunedins weather is for most parts wintery. Why would a 1 way system coerce me or others to frequent there during winter? So what is the point of making part of George Street into a 1 way system again?

This whole design seems to be aimed at a philosophical drive to turn the main street into a cycling mecca. Of course totally ignoring that most people live on the hills and very many are elderly. How about a design that actually meets the needs of Dunedin citizens, not some community the greens wish we were.

No car parking equals no people. Especially on rainy days. Those days do happen in Dunedin don't they?
The vehicle lane shown seems barely wide enough for a bus, let alone a bus to pass a parked delivery truck.
Nothing apparent, but I assume there will be parking racks for bikes, also assuming anyone will ride one.
Masses of sidewalk seating will be nice in summer, it will be very empty half the year.

Kind of a good Idea, but missing a heck of a lot the sky is fine weather 4 days every 6 months? what about cold raining and windy weather, where is the glass canopy to protect all. If you are going to go to that much trouble close the whole street and build coffee shops and news agents in the middle, but enclose the area, otherwise you are wasting your time. deliveries, parking, really wake up DCC. I remember sitting in a restaurant down the north end in summer (yep the summers Dunedin doesn't have sometimes) having soup the two doors open to the place and it was still windy and cold. - IMHO a Waste of coin. built a Gaint glass house over it.

Here we go again with more idiotic nonsense to snarl up Dunedin CBD traffic. Can the council not leave our roads alone? They've done enough damage to the traffic flow and access to parking already. Stop the meddling!! They're determined to keep cars out of the CBD, but how else will those shops and services survive? Most people live on hills in Dunedin. They are not going to walk or cycle en masse no matter how much some bureaucrat thinks they can force them to. This constant fiddling with the inner city roads is infuriating.

What would I want to park in the main street for? to do a quick bit of shopping of course and this new revamp would make it just about impossible... Not true somebody will say, well, recently after all the bike lanes and concrete nobbles set up in North Dunedin, around the Howe st area, I tried to park several times to go to Mcdonalds plus other outlets in that area and could I find a park?.. no. On one occasion I had a verbal altercation over a car park space. I don't go up there anymore and who is suffering because of it?.... businesses, just like Dunedin central will suffer... In actual fact the result of the council removing parks, I find is, you drive around MORE looking for parks, adding to congestion.