No flights for climate conference attendee 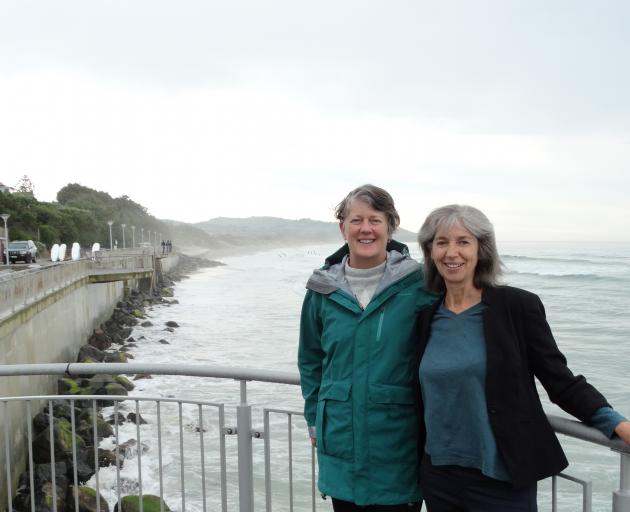 Looking forward to next week’s national Conference 4 Climate event in Wellington are conference organising group member Kate Jensen (left) and Dunedin climate campaigner Rosemary Penwarden. PHOTO: BRENDA HARWOOD
Dunedin climate activist Rosemary Penwarden is deeply committed to fighting climate change, so much so that she has made the decision to avoid travelling by aircraft.

Ms Penwarden will make the long journey to Wellington by land and ferry to attend Monday's Conference 4 Climate, which will bring together specialist scientists, politicians, and climate campaigners from across New Zealand.

A member of Oil Free Otago, the Coal Action Network, and Extinction Rebellion, Ms Penwarden feels the need to be "at the front line of direct action'' and is often involved in protests.

"So it makes sense that I would choose to take a transfer car to Picton and the ferry across to Wellington, rather than flying,'' she said.

New Zealand's political response to climate change, and ways to achieve an urgent, viable plan of action, will be top of agenda at the Conference 4 Climate event, organised by umbrella network Aotearoa Climate Emergency.

Among the keynote speakers at the conference will be former Dunedin mayor and incumbent president of Local Government New Zealand Dave Cull, who will appear via pre-recorded video.

The first was for media and governments to "tell the truth about the gravity of the situation - the threat of loss of life and ecological collapse''.

Activists were also demanding action on what science has proven, including quickly reducing carbon, as well as citizen-based methods for developing strategies, Ms Jensen said.

A major topic of discussion will be the drive to establish a Citizens Assembly in New Zealand before the 2020 general election.

"A Citizens Assembly has been successful in Ireland, and is a method for getting a fair representation of society around a table to discuss an issue, guided by experts,'' she said.

Ms Penwarden said the essential aspect of such an assembly would be that people were given the time to look at the evidence on all sides and come up with opinions and strategies.

"Of course, for it to be effective, the Government must listen to it,'' she said.

Mr Cull said his video address would discuss the fact that responses to climate change, such as adaptation and mitigation, "very much fall at the feet of local government''.

The major effects of climate change, such as sea-level rise and floods, impacted on local communities like South Dunedin, he said.

"There is a sense of frustration that central government hasn't taken more of a role - although we do have a Zero Carbon Bill coming up.''

The appointment of Greens co-leader James Shaw as Minister for Climate Change has resulted in a "productive relationship'', he said.

In recent years, the Dunedin City Council had brought forward its aspirations to achieve carbon neutrality from 2050 to 2030, and was working hard to reduce its carbon footprint.

Local Government New Zealand had commissioned a report to quantify the value of assets at risk in the case of a sea level rise of half a metre, and this had shown $3 billion in assets - mostly roads and pipes - under threat.

Issues such as this meant the implications of climate change effects were front and centre for local government.

"In terms of what confronts councils day-to-day, it is more in our face.''

Forgive me..but do cars and ferrys not use fuel!!

Though I think the climate thing is a scam, this is the first publicised person who isn't being a hypocrite when it comes doing something meaningful with these meetings and protests.
Good on you for reading by example.
Unlike our new mayor whom I shared a plane to Wellington with the other week (hypocrite)

Ironically, the ICCT says flying is more environmentally-friendly than driving for trips of this length.

Driving and ferrying rather than flying all 800km to Wgtn is hardly much of a sacrifice anyway. Not going at all, or busing, would be far more consistent with Ms Penwarden's avowed principles.

Against oil and yet travel by car and boat to a conference? Is that hypocritical? Use a video conference/skype! Led by example. These type of people want us to do things they say, not what they do.