Not fazed by backlash 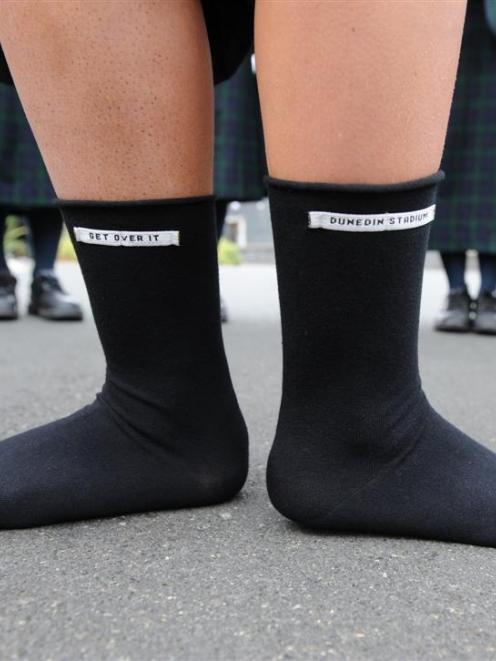 Columba College's Young Enterprise group will be selling socks with a message at tonight's rugby test. Photo by Stephen Jaquiery.
Negative feedback has not changed Columba College pupils' message to "get over" Forsyth Barr Stadium.

The school's Young Enterprise group, Lucrative, decided to create and market socks saying "Dunedin stadium, get over it", as part of its business venture assessment.

After the publication of a story in the Otago Daily Times on Wednesday, much negative feedback was posted on the newspaper's website.

However, the majority of people contacting the school wanted to buy a pair of socks, head of commerce department Suzanne Bishop said.

The group was "totally rapt", and had enjoyed reading what people had to say about their business.

"They are not downhearted at all about it," Mrs Bishop said.

She described some of the comments as "pretty low class", and as a result, a "buddy" system would be in place to ensure the girls' safety when they sold socks at Carisbrook tonight.

She believed the publicity would ensure the socks would sell out.

Stop the Stadium president Bev Butler said yesterday parents of one Columba College pupil were so incensed by the group's actions they sent a cheque for $500 to Stop the Stadium on Thursday.