Now it's time for a word from young master Alex 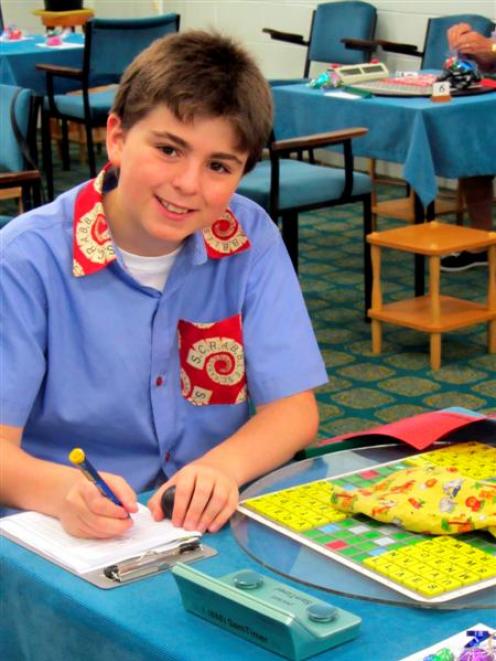 Alex Leckie-Zaharic prepares for his next game at the New Zealand Masters Scrabble Championship in Whangarei at the weekend. Photo by Tracie Leckie.
Forget golf, rugby, tennis or car racing. It seems the family game of Scrabble is where all the best prizes are.

The 12-year-old John McGlashan College pupil was selected to play against the top 24 Scrabble players in the country at the New Zealand Masters Scrabble Championship in Whangarei at the weekend, where he finished eighth.

Not bad, considering the competition attracts the country's best Scrabble players and he is the youngest competitor in the championship's 30-year history.

Alex plays in about 15 tournaments each week - many on the internet - and has accumulated many prizes, including a popcorn machine, a doughnut maker and a chocolate fondue set.

''I really like the ones we've got. We use the popcorn machine and the doughnut maker a lot.

While there were no major prizes for him in the masters championship, he said his placing put him firmly in the top 20 of New Zealand's Scrabble-playing elite.

''[The masters] was scary because it was the best of the best in the country, and here was little old me competing against them,'' he said.

To give you an idea of just how good he is, Alex said the best word he made during one of the games at the championship was ''jerrycan'', spread over two double word scores.

It earned him 130 points, which is about the same as the average player makes in an entire game at home around the kitchen table.

''I get an adrenaline rush when that happens. It's part of the lure of the game.''

Alex said many of his classmates thought Scrabble was ''weird''.

''But they don't understand its advantages. Your spelling and maths improves - so does your problem-solving skills.

''I like reading, maths and strategic thinking, and Scrabble is a combination of all those.

''I like it because every game is different. You never get the same letters in each game.''

Alex's mother Tracie Leckie said Scrabble players usually spent 20 to 30 years playing the game before they reached masters level, and those he competed against at the weekend were adults.

The next youngest competitor was 23-year-old Lyres Freeth, of Auckland.

She said Alex had only been playing for the past two years, but had already attracted many followers.

The masters was won by Howard Warner, with an average score of 461 points.