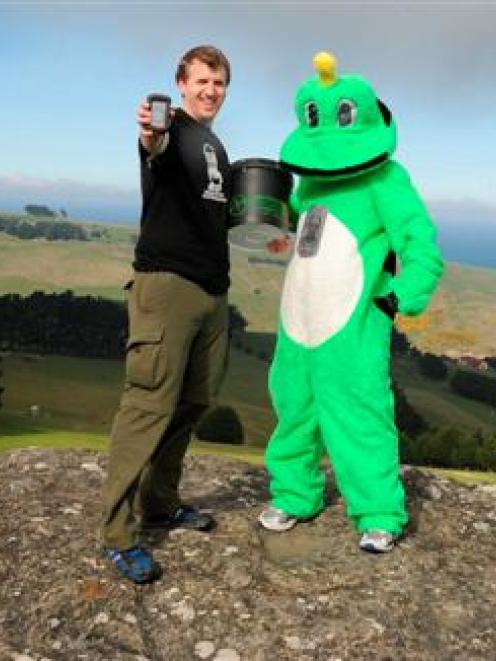 New Zealand Recreational GPS Society president Peter Walker and the global geocaching community mascot Signal the Frog stand at a site where a geocache is hidden on Otago Peninsula. Photo by Craig Baxter.
Dunedin residents can expect to see many people acting unusually while staring at GPS devices this Labour Day weekend, as New Zealand's first geocaching "mega event" is expected to attract about 700 people to the city.

New Zealand Recreational GPS Society president Peter Walker, one of the organisers of the event, said people from as far afield as Kuwait and the Netherlands had indicated they would come to the city to take part in what is essentially high-tech hide-and-seek.

Through the weekend, geocaching enthusiasts would use GPS devices to locate containers, called geocaches or caches, hidden in hundreds of spots around Dunedin. The caches contain logbooks of geocachers' codes, or items for trading.

"It's going to be nuts in Dunedin that weekend," Mr Walker said.

Dunedin residents should not be alarmed if they see people holding GPS devices and acting in seemingly unusual ways.

"You will probably see them intently looking at a GPS unit and wandering around, often in circles ... and then they might lunge into a bush to find what they are looking for." Dunedin was chosen as the host city after last year's devastating earthquake in Christchurch meant the event could no longer be held there.

Caches were often hidden in parks and reserves, but were also hidden in built-up areas, with "a lot" on Dunedin's main street, he said.

People in the geocaching community kept caches hidden from the public - whom they call "muggles" - by painting them to blend with the environment or disguising them as things such as bolts.

Mr Walker said the event would provide a boost to the city's economy, especially the accommodation sector, as many of those attending would stay in motels and hotels.

The event, from October 19 to 22, will be based at the Waiora Scout Camp.

There would be an opportunity for members of the public to learn more about geocaching on one of the days.