Ms Penwarden said hers arrived "completely out of the blue" on Wednesday evening, when "a black car pulled up my drive and a woman handed me a notice".

The notice banned her from entering 19 sites related to OMV, including the company’s offices in New Plymouth and Wellington and also the Maui A and B platforms, located off the Taranaki coast.

The list did not include any Dunedin sites, but it did include the COSL Prospector drilling ship and support vessels operating 146km off the Otago coast.

The move by OMV was "very peculiar", she told the Otago Daily Times yesterday.

"If OMV are worried about a 51kg grandma disrupting their multimillion-dollar projects, they really are in a bad way," she said yesterday.

Ms Penwarden was among 30 protesters who boarded OMV’s support vessel Skandi Atlantic, in Timaru in November. 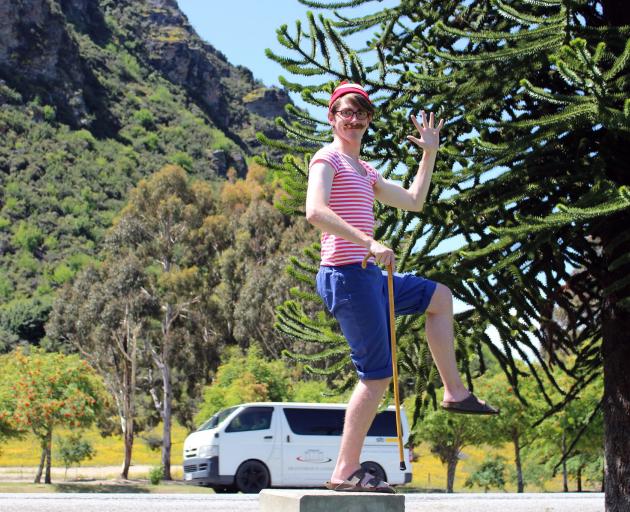 Ms Penwarden said he was "moving flats and ... sort of ‘no fixed abode’ at the moment", but Mr Brazil later posted a taunting social media message to OMV yesterday.

The post included a picture of Mr Brazil, dressed as though in a "Where’s Wally?" scene, taken in an undisclosed location.

OMV Australasia senior vice-president Gabriel Selischi said in a statement the five "retrospective trespass notices" had been issued to activists involved in recent occupations of OMV sites and vessels.

That included the three-day occupation of OMV’s New Plymouth office in December, he said.

The notices were issued by OMV NZ, following consultation with New Zealand Police and legal advice, he said.

The move meant police would be able to remove the individuals "should they return to any OMV-owned premises, particularly to our operating sites", he said.

The company had "not taken this step lightly", but "OMV’s top priority is the safety of all our staff and contractors working on our sites".

"These are high-risk environments ... The repeat illegal actions of these individuals puts the health and safety of our people and the activists themselves at risk."

The notices were issued days after it was confirmed the COSL Prospector had begun drilling at the Tawhaki-1 site in the Great South Basin, southeast of Balclutha.

The company had approval for up to 10 exploratory wells, but for now was only planning one well, costing $80million, to test for economically viable quantities of gas in the area, the company has said.

And, while the exploratory activity has generated protests, the potential economic benefits for the region and the country have been welcomed by other parties, including the Otago Chamber of Commerce and ProGas Otago spokesman Cr Andrew Whiley.

Others have pointed to a gas find, in particular, as having a role to play in the transition away from more environmentally damaging sources of energy, including coal.

Ms Penwarden said she had no plans to give up her fight.

“Do OMV think a trespass notice will frighten me? If so, I’d like to remind them that we Kiwis have a strong tradition of standing up to the big boys."

Opposition would include public talks planned in Dunedin, Balclutha, Gore and Invercargill, beginning later this month, and possibly also the formation of a sea flotilla "to bear witness to OMV’s destruction”, she said.

OMV, we do have police in this country. No need for black ops at people's homes.

Yes, but they have far more important community and traffic issues to content with rather than chase muppets around in comedy outfits who may well pose safety problems. Besides, the black ops present a rather exciting story for the protestors to tell their grandchildren. Lets not take away the thrill factor for them.....

It's of interest when legal process is served by the complainant. Bailiffs or Bust.

OMV is not a Court entity.

Great to see Jack treating the issue as a joke. The appeal will be to those who have little thought nor ability to commit to making critical changes. Hope he's not burning fossil fuels driving around avoiding the trespass notice.