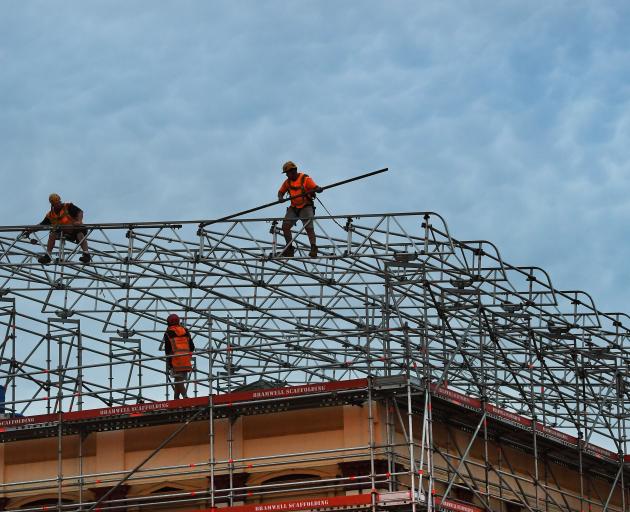 Scaffolders erect a temporary cover over the former ANZ building at the corner of George and St Andrew Sts, in Dunedin,yesterday morning. Photo: Stephen Jaquiery
Earthquake strengthening and reroofing work under way at a former ANZ building in George St is part of a wider upgrading project that will bring ''win-win'' benefits to Dunedin.

Oakwood Properties Ltd executive director David Marsh said the work on the building was part of a multi-million dollar programme of earthquake strengthening of buildings owned by the company in the South Island.

This included other buildings in Dunedin and Christchurch, and the overall work was part of a 10-year programme.

The former ANZ building was a ''beautiful old building'', at the corner of George and St Andrew Sts, its retail frontage occupied by Jay Jays.

Work was being undertaken over the next three months to ''bring it up to the 21st century'', by significantly boosting its earthquake strength.

''It's just getting it in condition for the next 100 years,'' Mr Marsh added.

The earthquake strengthening of the building was to have been undertaken in any case, and it had been decided to replace the roof at the same time, while scaffolding was in place, he said yesterday.