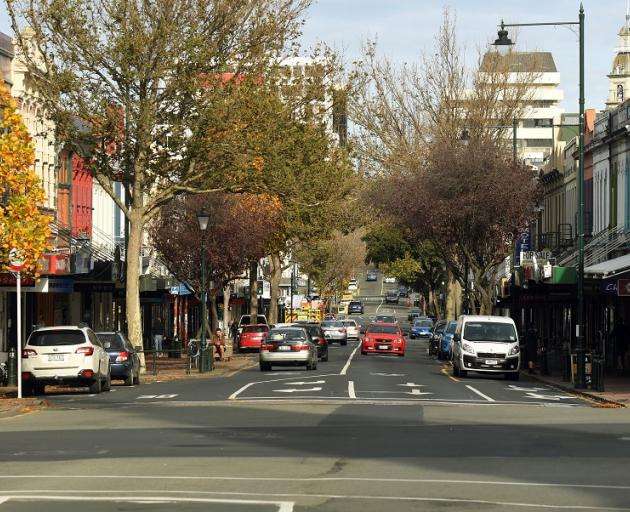 Dunedin’s much-debated main shopping street is a step closer to undergoing significant change after a majority of city councillors supported a design more welcoming to pedestrians.

Dunedin city councillors at the planning and environment committee last night voted 9-5 in favour of pushing ahead with promoting a one-way design, but with the flexibility of converting back to two-way traffic if this did not work out.

The committee withdrew its support for a previous plan that had a strong pedestrian focus, and it also rejected the latest recommendation from council staff — a two-way design with the flexibility to shift to one-way traffic.

The committee approved going ahead with a business case and developing a one-way design, with flexibility.

Dunedin Mayor Aaron Hawkins described it as the best available option to support safety and public amenity, as well as the most likely to attract external funding.

The council should have an ambitious vision for its city centre, he said.

George St should be a destination, not a thoroughfare, he said.

Cr Lee Vandervis said George St could be both a destination and a thoroughfare.

In cities that had pedestrianised their main streets, such as Norwich and Ipswich, there were strong calls to bring cars back, he said.

Deputy mayor Christine Garey said that her mother was run over in George St and the injuries affected her for the rest of her life.

She urged the council to be bold.

The debate followed passionate contributions in the public forum.

CCS Disability Action co-ordinator Mary O’Brien pushed for a model that was as inclusive as possible and said a narrower lane width would make it easier for people to cross the street.

Generation Zero representative Finn Campbell said people should be the foremost concern in the design of streets.

He wanted a reduction in car usage.

She warned councillors against entrenching a car-based environment.

However, Cr Jules Radich said the business community was overwhelmingly in favour of two-way traffic in George St.

Most people who shopped in George St arrived by car, Cr Radich said.

"Businesses already hit by Covid are going to be hit again if we do this," she said.

Cr Chris Staynes said some projects that attracted strong opposition had since gone on to be "loved" — the development of the stadium, for example.

Benefits of the one-way option included improved safety at the five-way intersection with London, Pitt and Frederick Sts.

Cr David Benson-Pope said the status quo was not working and Dunedin deserved a city centre it could be proud of.

"Colleagues, this is public space," he said.

"It doesn’t belong to a few invested loudmouths."

The direction of travel on the proposed one-way street has yet to be determined.

Yes, the thing I love about the stadium is how it sucks up every penny we have to service the debt of owning it! It's probably the reason why Aurora Energy was stripmined for evey dollar it could generate and now the citizens of Otago have to fork out extra!

As much as I'm sorry for Christine Garey's mother (who was run over on George St as article says), she must remain professional and act as a public representative and vote based on hard data not personal matters.
So let's talk the numbers, is George St statistically really more dangerous than average, given how many people use it? Can we look at the data?

Is there any scientific (survey of citizens) evidence that someone who does not shop at present with a 2 way street, will now come and spend in George St once it is 1 way? Answer- no. Discussion should have stopped there, but this is the DCC. Save our rates from increasing and stop trying to be a Sydney/Melbourne. I for one am miffed trying to find a carpark nowadays. This will be another reason to not to come to town as often and do my shopping at stores that have parking. Cr Stynes - the stadium is loved by residents? no - especially as it costs more than one-third of my ORC rates bill for next 50 years plus. Maybe my grandkids will pay it off.

Mr Benson-Pope should note his own advice on 'invested loudmouths'.

As for Mr Hawkins, the only 'vision' that's obvious here is of a dog's breakfast.

Unless they provide more accessible and affordable parking this is another nail in the coffin for city centre retailers. How soon can we get rid of these buffoons?

I would suggest the unhappy regulars posting here should actually look at the overwhelming evidence that pedestrian cities centres promote retail, not reduce it. "Oh", they will reply, "but what happens in the rest of the world does not apply to Dunedin". Get real, it does. Come on DCC, give the majority the liveable city centre we deserve. Prioritise people, not cars.

Meek decision. The future proof concept of George between St Andrew and Hanover entirely car free and the rest two way is a logical preference.

"Cr Chris Staynes said some projects that attracted strong opposition had since gone on to be "loved" — the development of the stadium, for example."
Yip, George St, CBD will become 'loved' just like the stadium. Looks great but empty most of the time and costing ratepayers for decades to come.
As for the status quo not working, it just did the job for me, thank you very much.

Gee, I'm absolutely amazed - all the greens and anti car groups want to block traffic. But the real users of George St, the business owners and shoppers, want two way traffic and parking.

And this is the same bunch of myopic councillors who still want to destroy the one way highway system and return Dunedin to 1962 with a single two lane state highway. We can just ignore the ensuing traffic jams and delays.

Roll on the election, all these greens fools will be rolled out and Dunedin ratepayers can just pay another $60 million to reverse this lots mistakes. Nothing beats ideology over reality.

And really Michaela Waite-Harvey, students can't look both ways when crossing the road? You really think most students missed that lesson most toddlers learn at age 4?