Common sense over the future of George St will not prevail until a new council is elected, a business group says.

The Dunedin City Council’s planning and environment committee this week decided to push ahead with a business case for a one-way design for city’s main shopping street, with the flexibility to convert back to a two-way street if it did not work out.

It rejected a staff recommendation for the opposite - a two-way design with the ability to shift to one-way.

The decision has been blasted by Central Dunedin Business Group spokesman Brent Weatherall, who said the rejected option would have kept everyone happy.

Mr Weatherall, speaking on behalf of the group of 40 businesses, said if that did not work, then one-way could be considered.

"But I don’t know why they’re hell-bent on changing the CBD ... to remove access of cars from the CBD inconveniently." 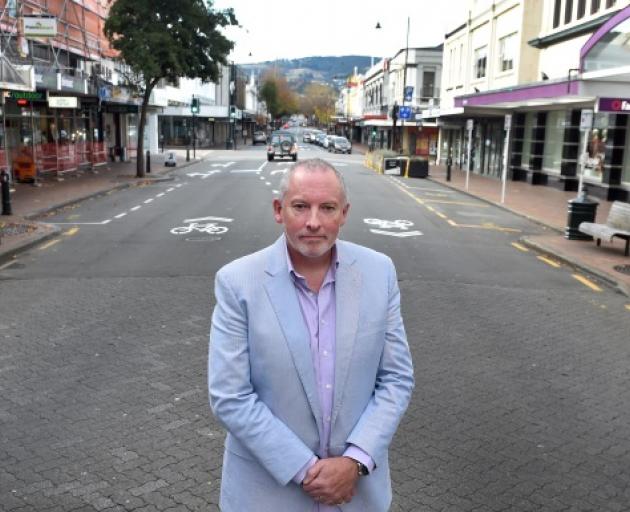 George St jeweller Brent Weatherall. PHOTO: PETER MCINTOSH
He believed the majority of councillors had a "premeditated" mindset when it came to George St, and while common sense would ultimately prevail, it would come at a cost.

"I just think it’s a shame it’s going to take a change of council to revert the mistakes this council intends, which the ratepayers of Dunedin will have to pick up the tab for.

"I sincerely hope business can survive the process."

His group would meet to discuss potential next steps.

"The line in the sand has been put by the council now."

He agreed with Deputy Mayor Christine Garey’s comment at the committee meeting that the council needed to be bold.

"However, I don’t believe they should be stupid about it," he said.

At Tuesday’s committee meeting, Dunedin Mayor Aaron Hawkins described the one-way proposal as the best available option to support safety and public amenity, as well as the most likely to attract external funding.

However, Cr Jules Radich said the business community was overwhelmingly in favour of two-way traffic in George St.

Most people who shopped in George St arrived by car, Cr Radich said.

The direction of travel on the proposed one-way street has yet to be determined.

Mr Hawkins did not respond to a request for comment yesterday.

"Mr Hawkins did not respond to a request for comment yesterday", of course he didn't as he doesn't want to answer for this monumental balls up and answer to the people, it's his way or the highway.

Yeah well it keeps being said. There are two camps. One simply wants to remove private vehicles from Dunedin. The other wants a bustling boyant center of retail and other business.
And can anyone explain how wide a single lane road will be that could be reconfigured to run as a two lane road? Just another bald faced lie.

Add to that Ms. Garey's "I don't need to explain why we don't do things" comment and there is the attitude of the council's leadership, throw them out now!!!

Shopping area should be pedestrian only...no cars, no scooters...plenty of parking elsewhere...get rid of cars etc 100%

Shopping & socialising is best done away from traffic, but, if it has to be - one way and slow please. Small, free, hop-on hop off EV's please. This business group are out of touch with what we shoppers want.