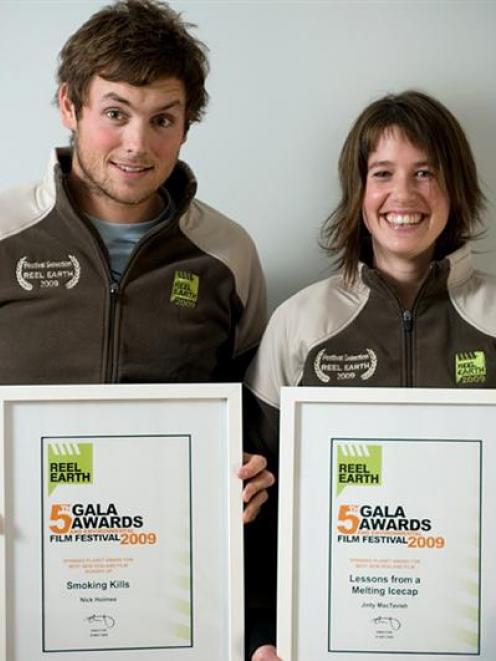 "It was a clean sweep for the University of Otago and also the Centre for Science Communication," the centre director, Prof Lloyd Davis, said.

"It makes me very proud that we're doing something right here."

Films produced by either current or former Otago students were "clearly striking a chord" in the national environmental film competition through their "effective story-telling", he said.

Otago students had previously won prizes in the Palmerston North-based competition but this was the first time all three awards in the New Zealand Film section had been won.

The competition attracts entries from around the globe.

Jinty MacTavish (24), an Otago master of science communication student who is completing her thesis at Raglan, in the North Island, gained the Spinning Planet Award for Best New Zealand Film with her film titled Lessons from a Melting Ice-cap.

"Anything that help gets the issue of climate change on the public radar this year is fantastic," a delighted Miss MacTavish said.

"Lessons" followed the journey of three Otago Girls High School pupils from Dunedin to Greenland, where they came face to face with the impacts which climate change was having on the physical environment, and on life in its settlements.

"It's a story that takes the huge, intangible issue of climate change and gives it a human face - a young, hopeful and very Kiwi one," film-makers said.

The three former pupils, Susan Smirk, Annika Metua and Peggy Russell, were able to make a three-week trip to observe climate change in Greenland after winning a national schools competition.

Miss Russell, who is studying architecture at Victoria University of Wellington, said she hoped it would focus more attention on climate change.

Nick Holmes (22), an Australian-born student and film-maker who is in the second year of his MSciComm studies at Otago University, was runner-up in the New Zealand film section with his short film titled Smoking Kills, which explores the impact of discarded cigarette butts on the environment.

Alexander (" Sandy") Crichton, a British-born film-maker who completed an Otago postgraduate diploma about four years ago, also shared the runner-up place for Karearea The Pine Falcon.

Mr Holmes is asking Australians living in New Zealand, and particularly in Dunedin, to contact him at saltwaterimages@gmail.com about playing a role in another film project on the politics of climate change.