OUSA president to stand for DCC 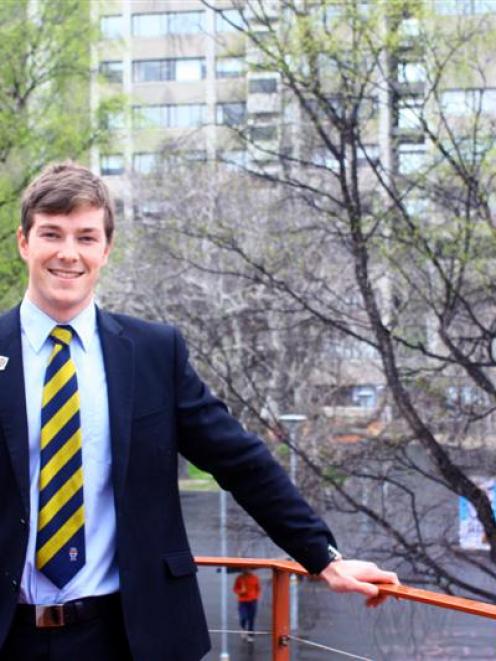 From gown to town: Otago University Students' Association president Logan Edgar will leave his position next month but is hoping it will not be his last role in politics - he plans to stand for a seat on the Dunedin City Council at the 2013 local government elections. Photo by Tim Miller
When Logan Edgar's term as president of the Otago University Students Association ends next month he is hoping his career in politics will not end with it.

Mr Edgar told The Star this week that he would run for a seat on the Dunedin City Council at the local government elections next year.

Mr Edgar said he thought students were not well-represented by the Council, and, if elected, he wanted to bring a student voice with him.

"At the moment councillors don't have to worry about the students because they don't vote, so the north area goes pretty much unnoticed."

Part of his election campaign would involve trying to get students registered to vote so they could have a say in how the city was run, Mr Edgar said.

Councillors had a perception problem when they talked about students, he said.

"I have met with a lot of the councillors over the past month and the first thing I have had to do is educate them on what actually goes on in North Dunedin.

"We haven't had a riot in five years, couch fires are declining, students being arrested are declining, but there is still a perception of the student area which hasn't changed in years."

The lack of infrastructure in North Dunedin would not be tolerated anywhere else in the city, he said.

"Obviously students don't want playgrounds but what about parks that are not used for rugby or basketball courts?"

Mr Edgar said he believed his time as OUSA president would help him in local politics.

Handling the change in the way the association was funded was his biggest achievement as president, he said.

'It was the biggest fear of my predecessors - what would happen to the organisation if the funding situation would change.""We had to negotiate and come to an agreement with the university about funding agreements to keep OUSA going into the future."

If there had been no agreement, the university and the city council would have had to pay for services aimed at students in North Dunedin, Mr Edgar said.

As well as learning how to run a large organisation like the OUSA, Mr Edgar said he had grown in the role during the past 18 months.

"When I came into the role I was very green ... I have gone from full-time scarfie to part-time scarfie, full-time president." One factor that motivated him was proving to people that he could do the job.

"Some of the people I beat in my first election were the same people I had to work with straightaway and they weren't happy about a new kid on the block who was running his mouth." "And now I'm really good friends with them now," he said.