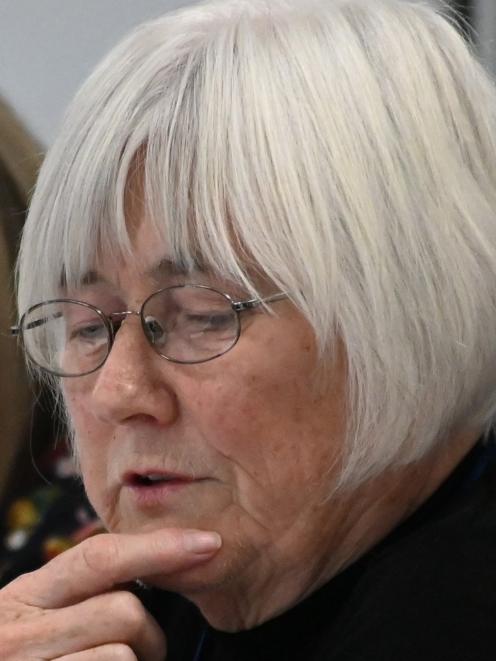 Marian Hobbs.
Embattled Otago Regional Council chairwoman Marian Hobbs has cast moves against her as an attempt to ignore national policy statements, saying she will not leave her role quietly.

She said she would use tomorrow’s ORC meeting to officially say she wanted people to know her potential ousting was "yet another attempt" by the ORC to "ignore national policy statements and reviews of its poor planning”.

“If I had gone quietly, the many citizens hoping for environmental improvements in Otago would have been told in whispers that I was too old, too stressed,” she wrote in her chairwoman’s report to the meeting.

Referring to the past few weeks, in which it became clear her position would be challenged, she prefaced the comments with “it has been all on”.

Deputy chairman Michael Laws remained adamant the issue at hand was one of personality, not policy, telling the ODT it was

"grossly unfair" for environmental groups and letter writers to characterise the leadership challenge as an attempt to hinder the improvement of Otago’s waterways.

It was actually about finding who was best suited to lead the council, he said .

“This is all about personality, and not about policy nor programmes.

"The disingenuous representation that this is a farmers versus greenies scrap does the claimants no credit.

“[It] is not about Otago water, nor the Otago environment, nor the implementation of national water policy,” he said.

The comments in her chairwoman’s report were "not only not true, but almost a fantastic delusion", he said.

Ms Hobbs’ comments suggested most councillors did not think the environment was important, which was "unfortunate and very, very sad", he said.

"It denigrates every reason why every councillor stood for the ORC."

The comments were an indication as to why councillors, including councillors from both sides of the plan change debate, were requesting new leadership, he said.

When asked, Ms Hobbs said the first attempt by councillors to "ignore" national standards came in a letter written on March 26.

The letter by seven councillors called for a 12-month re-evaluation of the council’s policy and finances, including the withdrawal and suspension of plan changes in progress and a review of its regional policy statement.

Ms Hobbs said the letter was focused on water issues, and proved her point the issue was water and not leadership.

The matter has since escalated. Nine councillors wrote to the chief executive seeking a meeting to replace Ms Hobbs after she refused to step down. An extraordinary council meeting on July 8 will determine whether she will be removed from the role.

Ms Hobbs said she went to the unusual lengths of writing an official note in her chairwoman’s report to put on record why she was in this situation.

In the report, she also warns what happens to councils if they do not follow through on policy statements.

"A regional council enacts national policy statements and ignores them at its peril, as Environment Canterbury experienced," Ms Hobbs said.

The government replaced that council with commissioners in 2010, in an attempt to sort out water management problems.

Ms Hobbs said she was made aware about three weeks ago some councillors were trying to have her "crossed out".

"We had a meeting ... Everyone promised it was a new beginning and then it all fell apart.

"This has been a long time coming. I will be glad when it is over."

Cr Alexa Forbes said she also believed a "deeper and wider" agenda was at play and it was not just a question of Ms Hobbs’ personality.

The council had made serious gains environmentally over the past six months and she worried that could be undone.

"I do not want to risk that progress. I do not know that a different chair will risk it, but I do see us putting a lot of effort and energy into something that is a distraction instead of getting on with what we are supposed to be doing."

Cr Laws said he thought the chairwoman’s report would be received by councillors as Ms Hobbs was entitled to her personal views, and he believed the rest of tomorrow’s meeting would proceed without disruption.

A total smokescreen by Hobbs. She has picked up on uninformed public sentiment and will push that sentiment as the reason she is being rolled. The communications to the minister will reveal the truth.

I personally don't care who is chairperson. I do care about the state of our environment. For such a low population density area with a lack of heavy industry, the state of our environment is shockingly bad. It is easy to point the finger and blame individuals or groups for past failures or avoid making hard decisions at the risk of being unpopular. However we must all take some responsibility for where we are and look to improve in the future.
Mr Laws I am glad that you and I hope all other councillors take the environment seriously but I am equally disappointed in ALL the councillors who are not able to put aside their likes or dislikes for another's personality aside. It should not and should never be about personality, we are all different and nobody should be disrespected or bullied for having different opinions. if rules, codes of conduct or laws are broken then fair enough. Otherwise can you ALL please put your petty squabbles aside and save what's left of our rivers, flora and fauna before it is to late.

Hobbs keeps proving that she lacks the maturity and stability to remain as the ORC chair. There is obviously something that is preventing her from personalizing the ORCs decision to oust her. The sooner they get rid of her the better. The world wont stop spinning with her departure...nobody will even notice!

For the South to have to comply with national policy statements on the environment seems anti-democratic to me.

Laws' disingenuous comments are ridiculous. Stop the clock and take a look at who would be best to lead. By the time you rule out all the conflicts of interest and one sided perspectives you're left with one conclusion.
Corporate owned farms, funding the Federated Farmers lobby group own our misguided councillors, except for Hobbs.
7 ODT articles and over two thousand words and not one that describes what it is that makes Hobbs incapable.