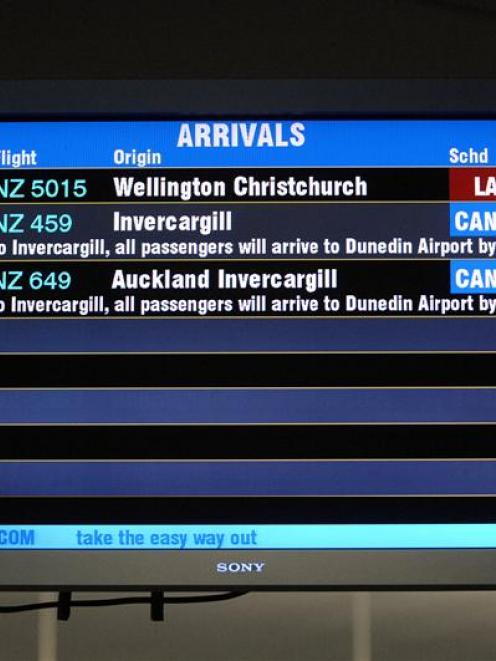 Outraged airport chief executive John McCall called the incident an "absolute blow" to both Dunedin and the airport.

After a air traffic controller called in sick, jet-powered flights could not fly to or from the airport from 7.40pm last night until 6.30am today.

Two incoming Boeing 737 flights, carrying 237 passengers from Auckland and Wellington, due to land at 8.15pm and 9pm, were redirected to Invercargill.

Air New Zealand provided buses from there to Dunedin Airport.

Fifty-eight passengers on a Dunedin to Christchurch flight were transferred from a 737 to a turbo-prop ATR-72, as it is Air NZ's practice to allow those planes to fly from airports without air traffic controllers.

Chief executive John McCall said it was unacceptable that a routine rostering issue forced the cancellation of flights.

It appeared too many qualified people had been allowed leave, he said.

"I asked the question: `What has gone wrong?'. I got very little in the way of an answer."

Evening was important for the airport, as business people often arrived and departed, and the city was filling up with students.

Mr McCall believed it was not possible the same situation would be allowed to develop in Auckland, Wellington or Christchurch.

"It's another case where Dunedin gets caught on the end."

He had been unable to fill the shift, after somebody called in sick.

Air traffic controllers from other airports could not be brought in because controllers had site-specific licences, and were trained for their job specifically at a particular airport.

South Dunedin MP Clare Curran was heading to Wellington Airport and did not know about the disruption when the Otago Daily Times called her about 6.15pm.

She was disappointed Air NZ had not alerted passengers about the disruption.

Balclutha woman Mary Phillips, who arrived at Dunedin Airport last night to find she had to fly in a turbo-prop, was displeased about the change in aircraft.

She was not keen on flying and disliked going on a smaller plane.

Mataura woman Dorothy Chamberlain was unworried about the turbo-prop flight.

She was just pleased that she would not be facing a delay for the 8.50pm flight.

Dunedin Mayor Peter Chin said he was disappointed by the incident and hoped the Airways Corporation reviewed its system to make sure the incident did not happen again.

It appeared to be an "administrative oversight", he said.