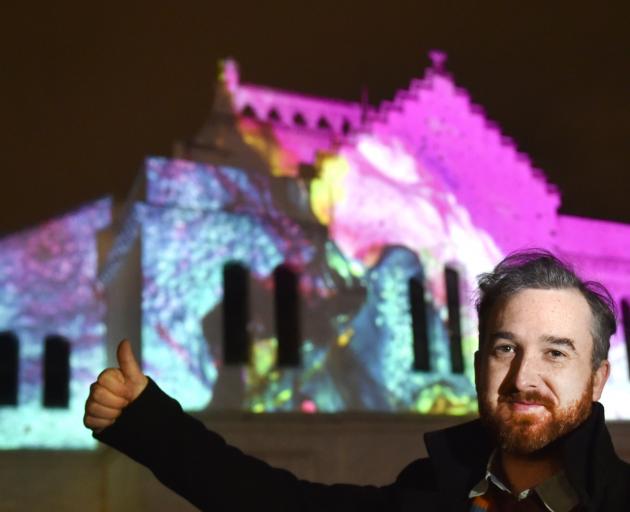 Dunedin artist Sam Caldwell in front of his latest canvas, Burns Hall. PHOTO: PETER MCINTOSH
A blank canvas is an open invitation to any artist, but few are as big and as blank as the one Sam Caldwell will be filling this weekend.

A projection artist, Mr Caldwell will use the wide open spaces of Burns Hall, next to First Church, for an artwork as part of this year’s Midwinter Carnival.

While the event’s flagship event, the lantern procession around First Church, has been cancelled due to the expected bad weather on Saturday, the remainder of the carnival’s events this weekend are going ahead as planned, or being moved under shelter.

In fact, Mr Caldwell would not be averse to a bit of aqua on show night.

"I think a little bit of rain wouldn’t hinder what we are trying to achieve ... if we were lucky enough to get a thick fog that could be super interesting."

The architecture of the hall, with its angles, crenellations and windows, added to the attraction of the project for an artist, Mr Caldwell said.

"I’m not responsible for any of the projection mapping, I’m providing some textures, colours and evolving imagery, and the work itself is quite textured and has craggy bits and interesting holes and blobs and all sorts of things and the shapes on the building will break that up quite nicely.

"I have a massive library of things I have shot for the past five years or so, interesting textures, liquids, and various techniques, which I have trawled through to find things which would suit the ... carnival this year."

Mr Caldwell’s work will be screened tonight and tomorrow night, from 6pm-10pm on Friday and 6pm-11pm on Saturday.

Mr Moeroa’s drawings, inspired by his Cook Islands heritage, have been adapted by Mr Golding and relate a traditional myth, Ina and the Shark.