Pair would be 'better off working' 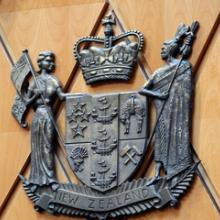 Photo: ODT files
Two Dunedin burglars have managed to bring shame on four families, a judge says, thanks to their double-barrelled names.

The pair committed burglaries independently in June and July last year but their combined spree began when they were driving along Flagstaff-Whare Flat Rd.

The owner of a Subaru Legacy had parked his car before going mountain-biking.

Tipa-McQueen and Halford-Feron smashed a window to get into the vehicle and drove off.

But they had not gone far before they crashed into a ditch.

The pair desperately tried to manoeuvre the stolen car back on to the road but failed. So they set fire to the Subaru and hurried back to the car they arrived in to make their escape.

Each pleaded guilty to theft and arson charges.

Halford-Feron followed up that incident with the burglary of a Waverley property from which he came away with a Honda quad bike.

But it was Tipa-McQueen who really stretched his criminal record.

During a five-day period in June he racked up five offences, beginning when he was stopped for drink-driving.

Five days later he jemmied open the door to a St Clair home, grabbed six bottles of alcohol, $200 in foreign coins and left in the home owners' $45,000 Holden vehicle.

Not content with that, Tipa-McQueen and a friend broke into a Highcliff Rd house and took more alcohol, a television and a watch, worth more than $4000.

That afternoon, the crime spree came to an end when the teenager was stopped by police while driving the stolen car.

Officers found the keys to the Holden inside the vehicle.

``Rather stupidly, I'd have to say, in explanation you said you'd bought it for $500 but you couldn't explain from whom or where you purchased it,'' Judge Michael Crosbie said.

He stressed the two men in the dock were young and both had made ``poor economic decisions''.

``You'd be better off working and looking after your families.''

The judge also noted the defendants each had hyphenated surnames.

``What that sometimes means is more shame on the families.''

He was also keen for Tipa-McQueen and Halford-Feron to hear the words of the people from whom they had stolen.

The victims were not rich people, the judge said, but had worked hard for the possessions they owned.

``I have no idea whether you have one iota of remorse or respect. Life is not handed to you on a plate. You have to work hard to get what you want, not rip someone off,'' one victim said.

Tipa-McQueen was jailed for two years, three months and ordered to pay $7814 reparation.

Halford-Feron missed a prison term ``by the skin of your teeth'', the judge said.

He was sentenced to nine months' home detention, 200 hours' community work and $1414 reparation.

The judge said the young father of two was a role model to his children, ``whether you like it or not''.