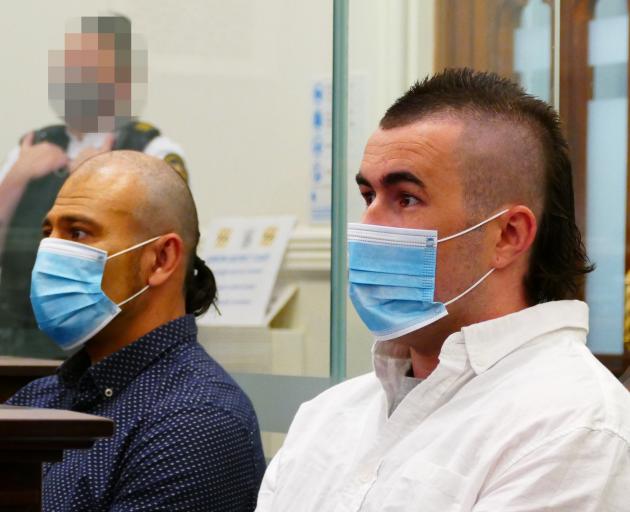 Gary Angus (left) and Zane O’Leary were part of a sophisticated drug manufacturing enterprise. PHOTO: ROB KIDD
A drug dealer who produced thousands of pills — known on the street as "Pepper Pigs" — has been jailed for three years and four months.

Zane Jon O’Leary (27) appeared in the Dunedin District Court yesterday afternoon after pleading guilty to a raft of class B and C drug charges.

"This was no small-time backyard operation," Judge Michael Turner said.

"There were clear indicators this operation was intended to continue."

Gary Angus (43) was employed by a gang as O’Leary’s handler and tasked with ensuring the man did not steal any product.

He got 11 months’ home detention when he was sentenced last year.

Angus was spotted picking up his co-defendant and travelling to a Milburn home where they spent several hours.

When police later raided the property they found the "older-style" pill press which O’Leary had fitted with an electric motor, making it capable of pumping out 1000 pills an hour.

Judge Turner said there was the potential to create $1.5 million worth of drugs.

Just days into the police operation, O’Leary instructed a flatmate to post a courier bag.

The package, bound for Auckland, was intercepted by police and contained more than 5000 pink pills featuring a pig outline.

O’Leary was selling them in bulk for $15 a pop and the potential street value of the haul was more than $150,000, the court heard.

Those involved in the drug deal communicated about the missing parcel but if it raised any suspicions of police involvement it was not enough to put an end to the crimes.

On March 1 that year, the duo went back to Milburn, on what they called "a mish", to complete a run of 500 pills which had been pre-ordered.

Although O’Leary thought he was producing Ecstasy, analysis of the drugs revealed they were a combination of ketamine (an anaesthetic) and eutylone (a synthetic stimulant).

Two pills and you would be "out of the gate", O’Leary boasted.

O’Leary told officers he had produced about 10,000 pills in the preceding six months and admitted he had been doing it "as a way to make money for his lifestyle" and help pay his parents’ mortgage.

At the time, he was on a sickness benefit and had got out of doing a previous sentence of community work because of a letter from his doctor describing a "chronic illness".

The court heard O’Leary had experienced several mental-health crises but had no formal diagnosis.

Counsel Meg Scally said although her client was integral to the drug enterprise, the profits were diverted to others.

O’Leary was paid in drugs to which he was addicted, she said.

There was a gang pulling the strings in the background, Judge Michael Turner said, but its identity had not been uncovered.

Because O’Leary has been in custody for the past 14 months, he will see the Parole Board imminently.