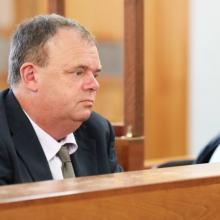 Grant Hannis awaits sentencing at the Wellington District Court. Photo: RNZ
An academic who sexually assaulted an elderly woman at a resthome did not tell the university he worked for about the case.

In a statement, the university said Dr Hannis told no-one that he was being prosecuted, and by the time staff became aware, he was no longer teaching.

"This has come as a great shock to colleagues and no doubt to many students, past and present," Massey University said.

It said Dr Hannis had worked at Massey since 2003 and requested early retirement in October, which took effect in December.

"Dr Hannis should have told his manager about the charge he was facing as soon as it was laid so that Massey could have considered his employment position," the university said.

"That would have included options such as suspension from work and ending his contact with students as well as providing necessary support to students and staff."

The university said the only complaint it was aware of against Dr Hannis involved students complaining about rudeness in the classroom, for which he had apologised to the students.

"Staff then ensured that any potential contact with students remaining through social media or the university's online teaching platform were severed. An investigation of his personnel record showed nothing to suggest any inappropriate behaviour towards students or staff."

Employment lawyer Susan Hornsby-Geluk said employees do not necessarily have to tell an employer that they have been charged with a criminal offence unless their employment agreement requires that.

But she said there can be a moral obligation to disclose such information.

"Given the nature of the charges and the role that that person held, there would be a strong argument that the obligation of trust and confidence did suggest that he should disclose that to his employer. It's not necessarily a strict legal requirement but possibly a question of ethics, trust and morality," Ms Hornsby-Geluk said.