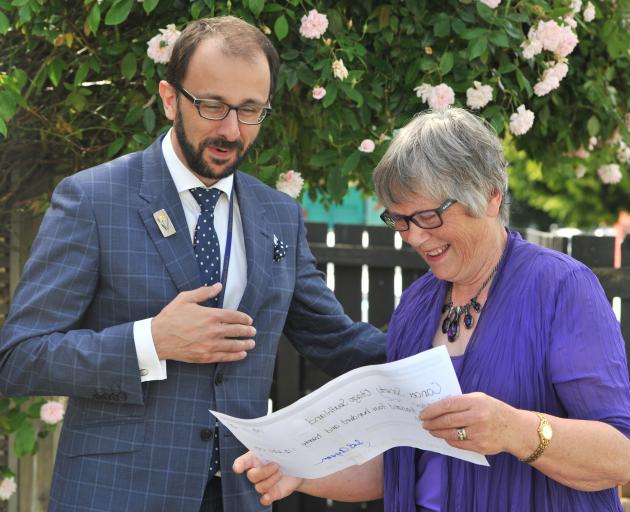 Cancer Society medical director Chris Jackson accepts a donation from Joan Ayson from sales of her late husband, Murray’s book. PHOTO: CHRISTINE ROBERTSON
The Cancer Society yesterday benefited from a final act of generosity by a man who had already given much to his community.

Almost the final project of landscape artist Murray Ayson’s life was to assist wife Joan to compile a book which collected plates of many of his works, Paintings from my Palette.

Mr Ayson, who died in February, specified that the proceeds be given to the Cancer Society for research into pancreatic cancer, the disease which killed him.

"As a society we are very dependent on fundraising events, which are driven by having crowds of people.

Mrs Ayson said many of the mourners at Mr Ayson’s funeral, held just before the Alert Level 4 lockdown, had pledged to buy the book, and there were healthy sales in bookshops.

"He said he did not want to make money out of it. He said that he wanted it to help other people with pancreatic cancer.

"There was an amazingly large number of people at Murray’s funeral, and that created a lot of the kick-start for getting a sizeable amount of money out of the book."

Mr Ayson, a former farmer, was also well-known in the community for his work for various charities.

"There is a lot of research being done on this cancer in New Zealand and as the custodians of this donation we will make sure that the money is channelled towards that: it is a huge responsibility and we are really grateful for their generosity.

"Because it is one of the most difficult cancers to track, it is often very widespread at time of diagnosis and for the majority of patients their pancreatic cancer is, unfortunately, incurable."

Dr Jackson said incidences of the disease were on the rise, and that it could be one of New Zealand’s top lethal cancers in his lifetime.

"A lot of that could be dietary and we also know there is a relation between body mass and pancreatic cancer and unfortunately New Zealand is at the upper end worldwide in terms of BMI.

"The treatments we have are not very good and they only extend life modestly, which is why investments in research like this are so critical," Dr Jackson said.