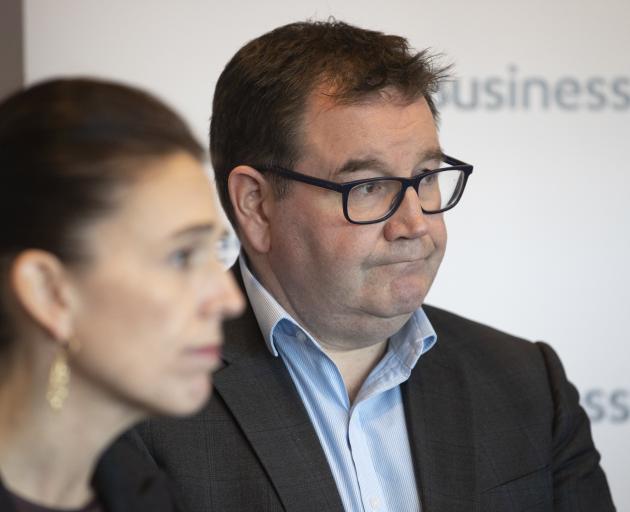 Finance Minister Grant Robertson with Prime Minister Jacinda Ardern at a business function in Auckland on Thursday. PHOTO: GETTY IMAGES
Last year, Finance Minister Grant Robertson unveiled a Budget like no other as New Zealand tried to tackle the economic shock of a global pandemic. Twelve months on, the 2021 Budget, too, will be all about Covid-19, but also a little bit extra, he tells political reporter Mike Houlahan.

All Budgets contain projections of what the Government’s books should look like in the years ahead, but those in the 2020 Budget were more speculative than usual.

When Finance Minister Grant Robertson stood up on May 14 last year to deliver his Budget speech, the state of national emergency declared after Covid-19 arrived in New Zealand had just been lifted and the country had moved back into Alert Level 2 a few hours previously.

As befitted such momentous times, Mr Robertson delivered a historic Budget, with unprecedented spending to shore up the pandemic-battered economy and unprecedented borrowing to pay for it all.

New Zealand seemed poised for grim times, and few would have disputed that prediction.

It did indeed seem that winter was coming ... but, fortunately, it turned out to be a relatively mild one.

While the New Zealand economy is far from out of the woods, and sectors such as tourism are still hurting mightily, the country’s accounts are in far better shape than almost anyone expected.

Unemployment rates are lower than many other comparable countries, the latest operating balance is $5.2billion better than the half-yearly update suggested it might be, debt is less than forecast, and greater than imagined economic activity has increased government revenues.

As Mr Robertson prepares to deliver the 2021 Budget next Thursday he finds himself in the pleasant and unexpected position of not having to grimly defend his wicket and has licence to play a few shots.

"When you look at the overall numbers, we have been resilient and we should be very pleased as a whole country about that," he said.

"It’s a very strong position for us to be in as we move forward towards recovery."

There is a caveat to that confidence, though: Covid-19 has not gone away, several major trading partners are still in some form of lockdown, and the defensive rampart a fully vaccinated population would provide New Zealand has yet to be assembled.

Budget 2021 would still be a Covid, Budget Mr Robertson said, but there was now the ability for it to be more than that.

"Covid is the backdrop is the way I like to look at it, it is the big dynamic that we need to deal with, and the reason why we are in a position to be thinking about recovery is thanks to that strong health response.

"The other side of that is being aware that society and the economy had issues pre-Covid around health, climate change, child wellbeing.

"As we move into the recovery phase we can start to redirect our thoughts towards some of those long-term challenges."

Mr Robertson has already told business audiences that climate change, lifting productivity, addressing the disparity between Maori and Pacific incomes and others, reducing child poverty and physical and mental wellbeing were among the themes for Budget 2021.

He told the Otago Daily Times all those would be addressed in some way next week, but at an initial stage rather than with a complete package.

"In putting this Budget together, part of my thinking has been to think of the three Budgets of this term all together and so we accept very clearly that we are not going to be able to achieve all our manifesto commitments or the sundry challenges we have all in one Budget," he said.

"Clearly, a major structural reform such as we have announced in health is going to be something we will focus on a lot, but we also have to keep the DHBs ticking over in the meantime, but then we also have to be starting that transition.

"We have taken on three big structural system reforms — health planning, the Resource Management Act and Three Waters — and any one of those would be a big individual piece of work.

"We think they are really important for the productivity and health of New Zealanders, but it will take a lot of work to bring them all through.

"The health one certainly is a project for the whole term."

While Mr Robertson has been planning the nation’s economic activity he has not neglected his hometown of Dunedin.

Several local issues had been on his radar screen, especially healthcare and rail.

The new Dunedin Hospital, which still awaits Cabinet sign-off on its detailed business case, was a project the Government remained committed to, he said.

"That money was set aside in the 2019 Budget, and progress continues to be made there with Cadbury coming down.

"We will continue to push on with that."

Mr Robertson said he was also acutely aware of the cancer waiting time issues which had befallen the Southern District Health Board, which this week outsourced treatment for 200 patients to try to meet demand.

"We know there have been issues in the Southern DHB and we will work on those in the short term before the new system is up and running in 2022."

Mr Robertson, who went to school in the shadow of the KiwiRail Hillside workshops, said the Government was committed to the future of rail.

"Hillside has a real place in my heart . . . we want to make sure that we continue to see what we can do there to support our rail operations around New Zealand."

Mr Robertson said there would be nothing like the eye-wateringly high numbers of 2020 in this year’s Budget: that was an extraordinary situation to a one-in-100-year economic shock.

"This is much more back to normality in terms of the scale, but it is still a Covid Budget, it still needs to stimulate and support the economy because that is going to be required for a little while more.

"It is a tribute to New Zealanders that because of the hard work that people put in that we are at this point, but there is still more to do to support the economy because we’re not quite there yet."