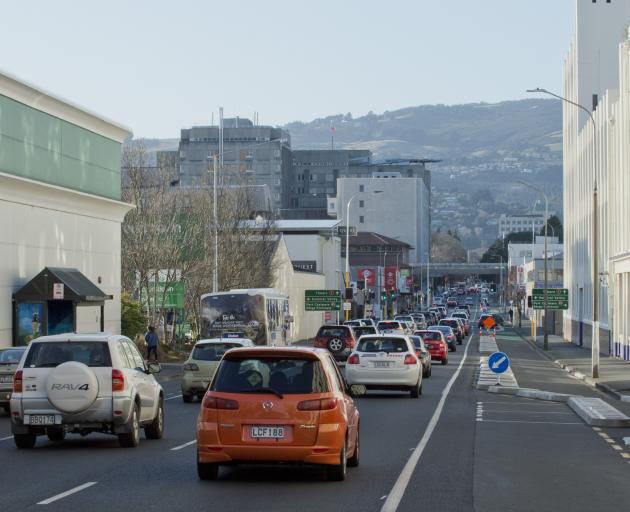 The one- way system heading north on Cumberland St, outside Countdown. Photo: ODT files
Parking may be removed at certain times of the day from streets either side of the former Cadbury factory while it is demolished to make way for the new Dunedin hospital.

However, the work is not expected to require road closures.

A project traffic management strategy, released to the Otago Daily Times under the Official Information Act, said options such as temporary speed limits, lane reductions and moving lanes across Cumberland and Castle Sts so what was now parking became the left-hand traffic lane would be acceptable.

Deemed unacceptable was any lane reduction or road closure between 7am and 7pm, trucks parking temporarily in cycle lanes to gain access to the site, or allowing heavy vehicles going to or from the site to use local roads rather than highways.

"Closing any of the state highways would only be supported under an emergency or as a short-term closure on Sundays, between the hours of 7am to 7pm." 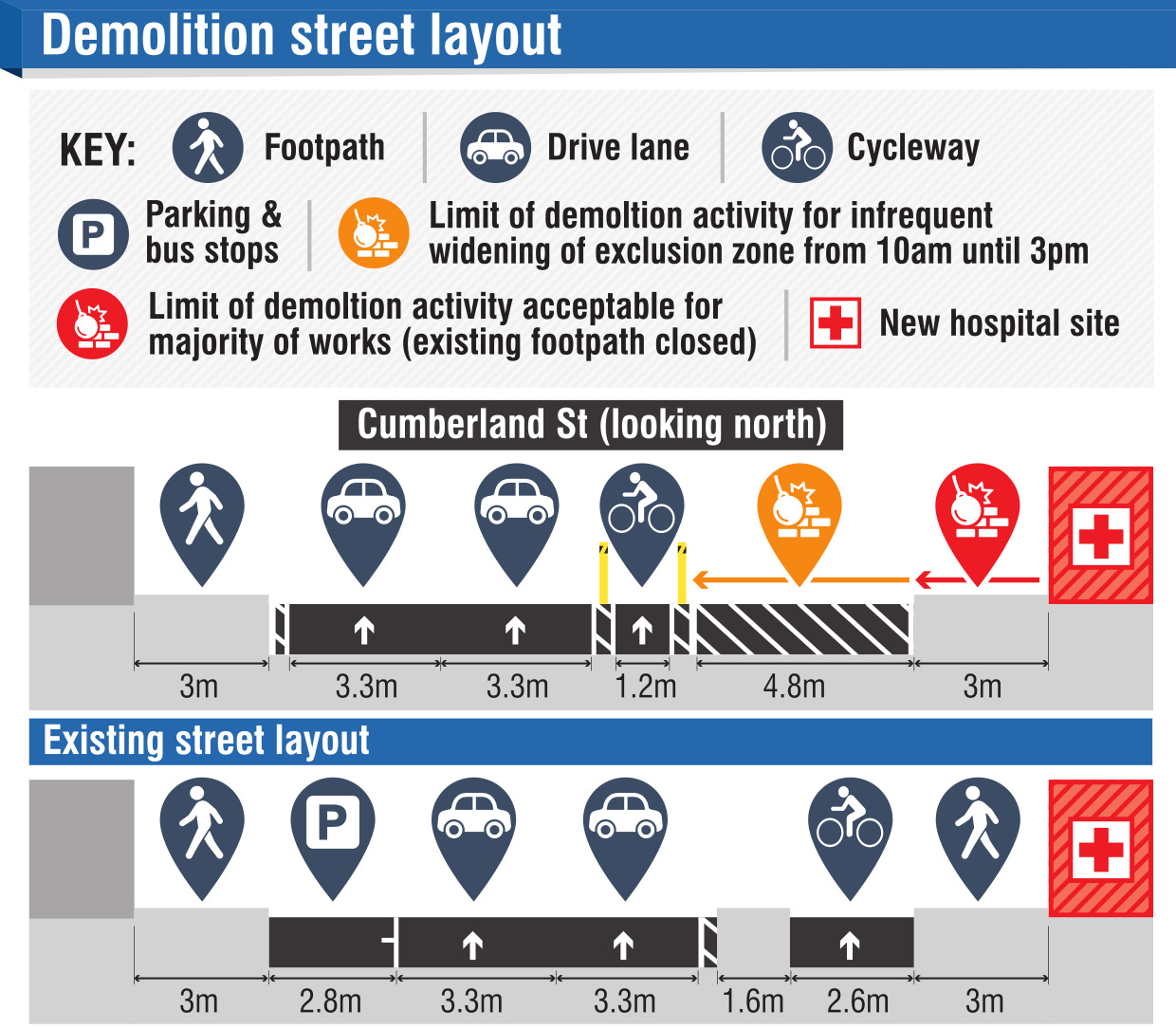 Demolition contractor Ceres is understood to be planning to demolish most of the former factory from within the site boundaries, using the former warehouse area it levelled last year as a staging area for removal of rubble.

However, the traffic strategy, drafted by engineering design firm Stantec and submitted to the ministry in September 2019, highlighted the removal of the street-facing facades as posing the most issues for traffic management.

It proposed removing parking from both sides of the road when that work happened and two lanes of traffic taking up the parking, and current left hand lane.

Cycles would use much of what is now the right hand lane.

A 4.8m buffer zone would be in place alongside the footpath, allowing almost 8m between the facade and passing traffic.

"This widening, to the west on Cumberland St and to the east on Castle St, can only be undertaken during the inter-peak periods (10am-3pm) and one footpath, two vehicle lanes and the cycle lane must be maintained.

"It is expected that these lane shifts are infrequent."

A Ministry of Health spokeswoman said for current and foreseeable demolition works there would not be any road closures.

The traffic management strategy for the building phase of the project would be finalised once the final design had been settled.

The strategy stressed that a safe corridor had to be maintained for cyclists, as before the construction of separated cycle lane, that section of State Highway1 had accounted for 60% of all serious cycling and pedestrian crashes.

"Safe hit posts" and cones would be allowed temporarily to demarcate the cycle lane but it would be unacceptable for them to be used semi-permanently.

"If the state highway is closed for a short period of time, any detours must also consider a safe treatment for cyclists."

The strategy also set out an approved route for heavy vehicles, which were to use St Andrew St to leave the site and were then restricted to SH1, unless they had to get down to the waterfront roads.

Heavy vehicles could also use Queens Gardens, by the Chinese Garden, to change from travelling south to travelling north on the highway.

"This limits the impact on the local roads by heavy construction vehicles and ensures that vehicle movements are controlled by signalised intersections, especially when these vehicles are making turning movements."

This all implies that the majority of construction materials will be delivered on the southern one way system. Will the ODT do an article on how it will be effected during construction?