By Tim Miller and Molly Houseman and Daisy Hudson
0 Comments

Two cruise ships, Celebrity Solstice and Azamara Journey, left Dunedin last night and are expected to be the final visits for the season after the Government’s ban on ships until June 30 came into effect.

A crew member from one of the ships said about 180 passengers would not return for the final leg of the trip back to Australia.

He was unsure exactly how many passengers had chosen to ditch the ship.

At this stage no more cruise ships were expected this season but Port Otago was waiting on confirmation from companies with ships already in New Zealand waters, Mr Winders said.

Ships had been scheduled to dock at the port in the next month and when added to the nine cancellations already this season, meant the port and city would take a financial hit, Mr Winders said

Wednesday’s visit by Radiance of the Seas has been cancelled.

Meanwhile, authorities this afternoon confirmed a cruise ship passenger suspected of having coronavirus on the aboard Golden Princess has tested negative.

Director-general of Health Dr Ashley Bloomfield confirmed the passenger tested negative and the cruise ship had returned to Melbourne.

The ship docked in Dunedin on Satuday and passengers disembarked, but passengers were not allowed to disembark in Akaroa yesterday because of the suspected case.

The ship was yesterday being held off the coast of New Zealand with at least one suspected case of coronavirus on board, and three passengers under quarantine.

But the tests for the virus came back negative last night, Harris said.

Dr Bloomfield said yesterday the officials were investigating the planning and response needed should the test come back positive.

Based on overseas experience the main danger was the virus spreading throughout the ship itself rather than when passengers disembarked, Dr Bloomfield said.

A Ministry of Health spokesman said there would be no further information regarding the situation until the result of the test was known.

Mr Winders said the port would wait on the result of the test and advice from the Ministry of Health before making any decisions. 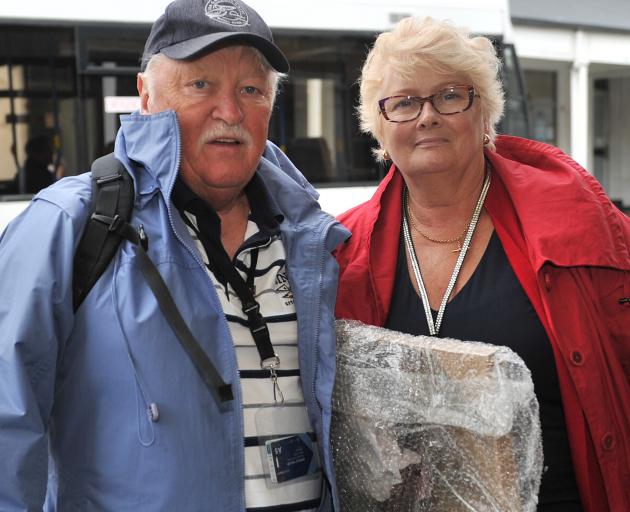 Celebrity Solstice passengers Ron and Jan Taylor, of Australia, are enjoying their holiday but are aware the rules on getting home could change each day. PHOTO: CHRISTINE O’CONNOR

He did not have any specific details about the ship or passengers.

No advice had been given to Port Otago about the need for staff to self-isolate and he was not aware of any concerns staff had raised about the situation, Mr Winders said.

One person working in the cruise ship terminal on Saturday told the Otago Daily Times they were voluntarily isolating themselves until the passenger’s test result came back.

West Harbour Community Board member and cruise ship volunteer Jan Tucker said there had been no official advice for volunteers who worked on Saturday but a message had been sent around that volunteer organisers were aware of the situation.

Dunedin i-Site manager Louise van de Vlierd said she and her staff had been "off their feet" helping New Zealanders from two ships avoid a trip back to Australia and the need to self-isolate.

Celebrity Solstice still planned to dock in Sydney for its final stop, but staff would remain on the ship for 30 days with no passengers.

While passengers in Port Chalmers yesterday were calm and enjoying their holiday, there was a general feeling of being in limbo.

Celebrity Solstice passenger Ron Taylor, a New Zealander who lives in Australia, said he and his wife Jan were not panicking but were aware the rules were changing every day.

Laura Alonso, of Washington State, a passenger on Azamara Journey, said extra attention had been given to sanitation aboard the ship, and passengers were sanitising before and after meals, as well as events and performances.

Her husband Brian was carrying hand sanitiser in his pocket, but they were hopeful.

"We are on holiday having a great time — we cannot worry about tomorrow."