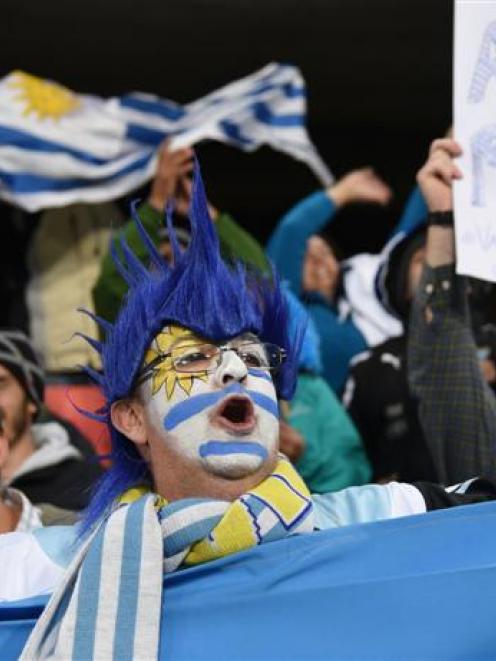 Uruguay fans celebrate their team's win over Serbia 1-0 in the Fifa U 20 World Cup at Otago Stadium yesterday. Photo by Craig Baxter.
The beautiful game came to Dunedin yesterday and it was, well, beautiful.

While there were as many red cards in the first match as there were goals in both matches combined, it did not tarnish the occasion. If anything, it added to the drama.

Dunedin has been spoilt for high quality sport the past seven months, starting with a Four Nations rugby league test match between the Kiwis and England last November and Cricket World Cup matches at the University Oval in February.

If the first two matches in Dunedin are anything to by, Fifa's second largest tournament is set to entertain with some silky smooth football.

Expat fans flocked to the stadium yesterday, including a large group of Mexicans who made themselves heard with instruments and chants in the opening match. But they were silenced when Mali scored two quick goals late in the second half.

Rowdy Mexicans were replaced by pockets of loud Uruguayan and Serbian supporters for the second match, who added to an atmosphere vastly different from anything seen under the roof before.

While the ground was far from full, there were times when you could be forgiven for thinking there were at least 15,000 there.

With Mali and Uruguay winning, the so called ''group of death'' is poised to heat up on Wednesday, when Mexico plays Uruguay and Serbia plays Mali. Group C heavyweights Colombia and Portugal also play in Dunedin at 1pm on Saturday, before Serbia and Mexico wrap up group D at 4pm.

Dunedin will also host a round of 16 playoff match on Wednesday week, June 10.