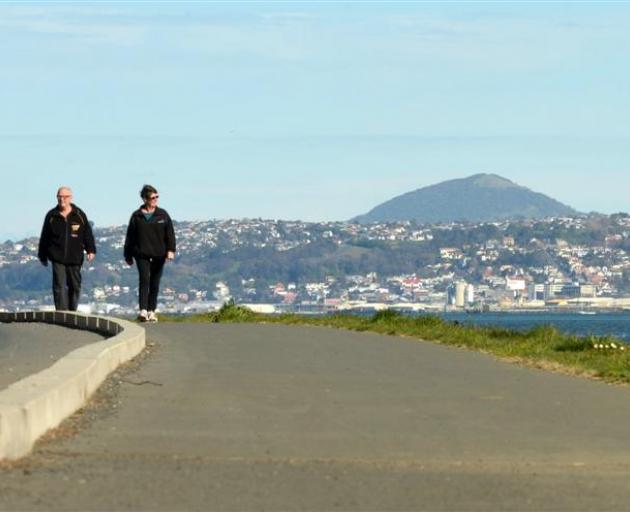 Walkers enjoy a stroll on a completed section of the Otago Peninsula shared pathway. Photo by Stephen Jaquiery.
Another $20 million jump in the cost of the Peninsula Connection project has highlighted the squeeze on infrastructure spending, just as Dunedin city councillors sit down to budget for the coming year.

A series of reports released ahead of the council's 2019-20 annual plan deliberations, which begin this week, have revealed the cost of completing the Peninsula Connection has increased again, from $44 million to $64 million.

The council's share of the project now stands at $28 million, while the NZ Transport Agency is expected to pick up the rest.

But even within the inflated budget, there is no room for sections of the project beyond Portobello, which have been removed from the project to save another $10.5 million.

Council infrastructure services general manager Simon Drew said those sections would be completed at a later date, drawing on other council budgets, but "a bit slower".

The latest increase came after the cost of the road-widening, cycle/walkway and seawall upgrade project more than doubled, from $20 million to more than $40 million, in 2017.

At the time, the project still envisaged a cycle/walkway from Taiaroa Head to the city.

Mr Drew said the subsequent cost increase in part reflected deficiencies in the earliest planning stages of the project.

"It's always been a $60 million project, and people have kidded themselves into thinking it was something less."

That included the Dunedin Hospital rebuild, Aurora's network upgrade, the University of Otago's ongoing building programme and the council's own plans, from a central-city upgrade to the city's waterfront development.

The council was already experiencing problems attracting tenders from stretched construction companies, leading to "upward pressure" on construction costs, and that was expected to worsen, he predicted.

The revised 2019-20 budget, to be considered this week, also included $16.9 million in accelerated three waters capital spending - including on stormwater problems - among other budget changes.

The council's financial strategy still limited the organisation to core debt totalling $350 million, but the challenges posed by projects in the years ahead meant that might have to be reviewed, Mr Drew predicted.

Stop the waterside development project.
It's insane, to be undertaking another huge project in Dunedin, with the stadium debt still there.
Why don't the council concentrate, on more vital projects, until the debt of the stadium is paid off or has been considerably decreased? Why make this an never ending story of increased rates, and increased charges for using services and amenities for the Dunedin people?

Summarises the DCC's level of competency, excuses and overall ability.

Has anyone asked the question & got an answer why did they not start building from Andy Bay out towards the peninsular. At least then more people would be using it. But maybe this project is not about users or ratepayers.

So we absolutely must have a bike way to Portobello.
Money is being brought forward from other years in the 10 year plan. What was that money going to be spent on? Or does council think we are all so thick no one will notice?
Just how much do councilors think Dunedin should spend on bike paths. The $28 mill of council money is $233 per person. And we still have the (minimum) $25 million to get a bike way to Pt Chalmers. Then the Caversham & Wingatui tunnels and associated bits. And of course the 12km to Tairoa head. A $20 million bike bridge to the harbor basin anyone?

Lets for once get some honesty from council and councilors. What is Dunedin going to miss out on by pouring this money into a hobby for 1 - 2% of citizens?

I love it how the DCC says 'core debt' of $350m. It seems to forget the $230m + other debt. I suppose ratepayers being on the hook for over $580m in DCC group debt is neither here or there for such an all knowing entity....Vote them out!

Especially as the white elephant has a NEGATIVE market value, ie the value of the borrowings plus PV of losses are greater than the asset.