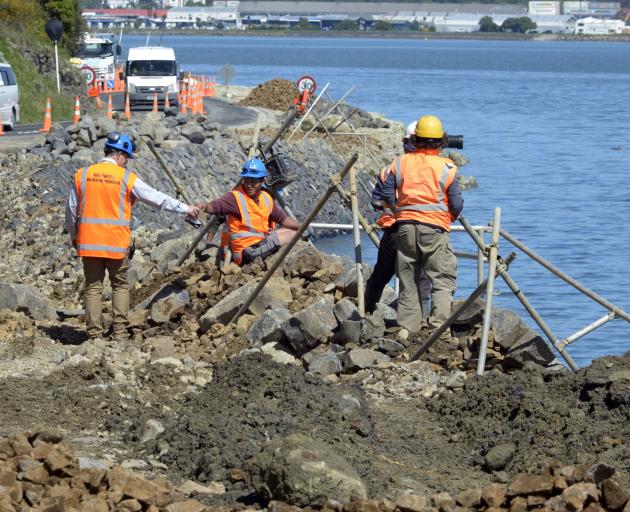 Contractors work on the wall in Portobello Rd.
Some remarkable stretches of hand-placed rock wall are being completed beside Otago Harbour. David Loughrey visits the construction site to find out more about the project.

Each of the 500,000 rocks in a 4.4km section of the new Otago Harbour rock wall from Vauxhall to just short of Glenfalloch has to be placed by hand.

If that sounds like hard work, consider the fact those rocks weigh between 20kg and more than 100kg.

Despite the magnitude of the task, a quite remarkable distance of wall, a jigsaw of interlocked basalt now snakes along Portobello Rd as the road safety and cycle/walkway work continues apace.

The wall is part of a $64million project that will widen and sometimes raise the road, and add a lane for cyclists and walkers on 26km of road between Portsmouth Dr and the Royal Albatross Centre.

The Dunedin City Council's share of the project stands at $28million, and the NZ Transport Agency is expected to pick up the rest.

The scale of the work is something of a revelation as you drive down Portobello Rd, which is now considerably wider. The cycle lane runs beside the road then sometimes dips away beneath it, following boardwalks over the water to allow views of the original wall kept exposed for posterity.

That wall, a category 1 listed heritage structure, is mostly being entombed under fill, except for four lengths considered to be of high heritage importance.

The 2014 resource consent for the replacement wall stipulated its construction was to "consist of hand placed rock built in honeycomb style".

The Heritage NZ listing says the original wall from Vauxhall to Broad Bay was built by private contractors working for the Otago Provincial Council.

A completed section of the new Otago Harbour rock wall to the west of Glenfalloch. PHOTOS: GERARD O’BRIEN
The Portobello Road Board made a few kilometres of the original wall in Broad Bay and Portobello.

After 1877, the government used prison labour on the rest of the Broad Bay to Taiaroa Head Rd. It was likely the army built the stonework on Pilots Beach and Harington Point.

For the new wall, fill material to widen the road was sourced from the Logan Point quarry, and recycled material from other sites, while the rocks came from Blackhead.

The weight of the rocks inspired a variety of descriptions of how they were "placed".

Those at the site said the rocks were "manoeuvered", "dragged" and "pivoted" from where they were dropped off by a digger.

Scaffolding at the construction site showed the workers the profile and curve of the wall.

Fulton Hogan senior project manager Brett Paterson said the rocks required no other structure to keep them in place once the wall was completed.

"It's all about gravity," he said of the wall's strength.

Mr Paterson said the first stage of building the rock wall was to "trim the existing topography" to provide a platform to work from.

After that, fill was put in place, and then "the rock wall boys come in".

A "toe" would be dug at the base of the wall, and placement of rocks would begin directly on to the harbour bed.

"They start at the bottom at low tide, and then work their way along as much as they can."

As the tide started coming in, they would work their way up the wall.

The shape of the rocks had to be considered during placement.

"It is very much a jigsaw puzzle type arrangement." 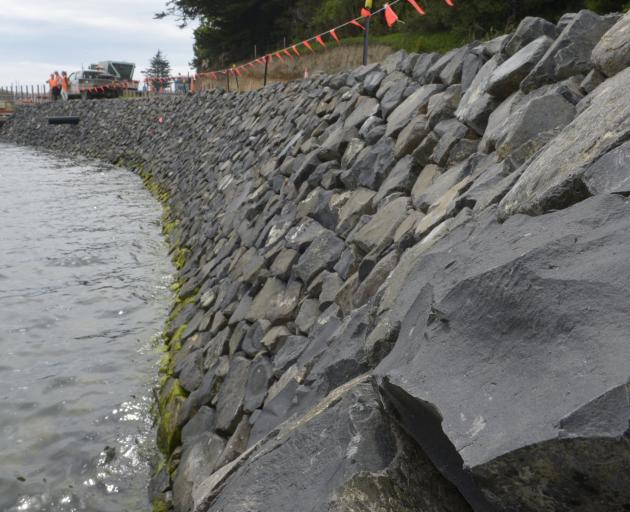 Interlocked rocks on a completed section of the wall.
Rocks of the appropriate size and shape were chosen to fit the gap required, although there was "art and skill" required to get the right rock in the right place, and make sure they were locked together.

Subcontractor Q.C. Contracting was used to build the wall, and had developed a crew of people trained to do the work.

"They've got their core group of guys, and they bring in additional resources, and they'll put their experienced guys with some of their new guys to train them up."

Numbers varied, but there were usually between 15 and 25 people building the wall.

"I am pleased with it," Mr Paterson said.

"With the scale of the work, the volume of the material and the amount of handling, the guys have done an amazing job."

The work at the site from Vauxhall to near Glenfalloch is expected to be finished in spring next year.

That will link the city with Macandrew Bay.

Work is also under way at Turnbulls Bay, just to the east of Broad Bay, linking Broad Bay with a recently finished section that stops just short of Portobello.

Dunedin City Council transport delivery manager Josh von Pein said the section from Macandrew Bay towards Broad Bay was under negotiation with contractors, and work was expected to start next year.

The next "conversation" to be had was taking the cycle/walkway through Portobello.

Although there was no certain deadline to finishing the whole project, Mr von Pein said the council had given the community an assurance it would happen.

"It is certain that it will happen."

Pity the road surface for actual vehicles wasn't widened as much as the cycle lane, the cycle lane could have a bus driven down it.

While the historical and aesthetic value of this wonder cannot be understated, I have always had just one question in regard to the design of the harbour wall. The 'ramped curve' of the wall from base to rim is very much like a soup bowl, which, at high tide allows water to slop over the road, especially on some of the corners, and the potential to erode the roading/pathway surfaces during strong winds and storms. Why was there not a curved concrete rim built along the top to direct wave action back into the harbour? You see this design implemented on many other sea walls around the world. None the less, an excellent asset and attraction for Dunedin, well done to those hard working crews.

A superb work of art and engineering!