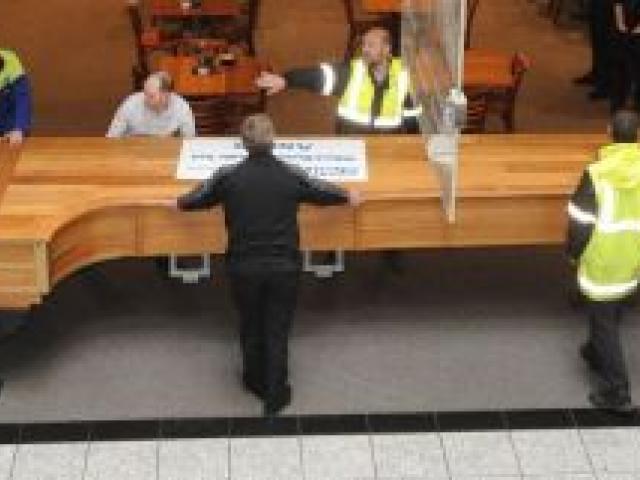 Adrian Mann transported his 5.7m, 1.2-tonne piano from an old shed in his home town of Timaru to the Otago Museum this week.

It took 12 people to move it from the back of a truck, on to a forklift and through double glass doors into the museum foyer.

The 23-year-old began building the piano in late 2005 after years of playing prompted him to start looking inside the instrument.

"I started asking myself questions. I discovered that longer strings make better sound," he said.

It took nearly four years to finish the piano out of "mismatched timbers" encased in a rimu veneer.

Mr Mann decided to move the piano for the first time when he heard Sir Elton John would be playing a concert in Dunedin.

He had tried to contact the performer to see if he would be interested in playing the lengthy instrument, but had only got as far as his manager and was unsure if it would happen.

Either way, he said the trip had been "great" and "exciting" and, he would be on hand to play it for one hour at 1pm, Monday to Friday, until it returns to Timaru on December 6.

Mainfreight provided for free a truck and drivers to transport the piano south.

Driver Jeremy Halkett said the extreme piano "would be up there" as one of the strangest jobs he has done.

Transporting it was "not too bad", but he was concerned about keeping the one-off piece safe.

The only problem now was getting it back to Timaru.