Otago Aero Club A category chief flying instructor Johnny Penno said it was "good people" who kept him in the same career for about 55 years.

He is unsure if he will renew his medical certificate, which he needs to fly, next month.

He was reunited with Air New Zealand pilot Jonny Pagan at the club in Dunedin over the weekend, to renew Mr Pagan’s instructor rating.

It was 32 years since the two were first photographed together by the ODT, when Mr Penno initially trained Mr Pagan.

Mr Pagan said Mr Penno had inspired thousands of people in the industry and instilled confidence in him, giving him his first job at 18 years old.

"I am always grateful for that ... he was a tremendous boss and we have lots of laughs." 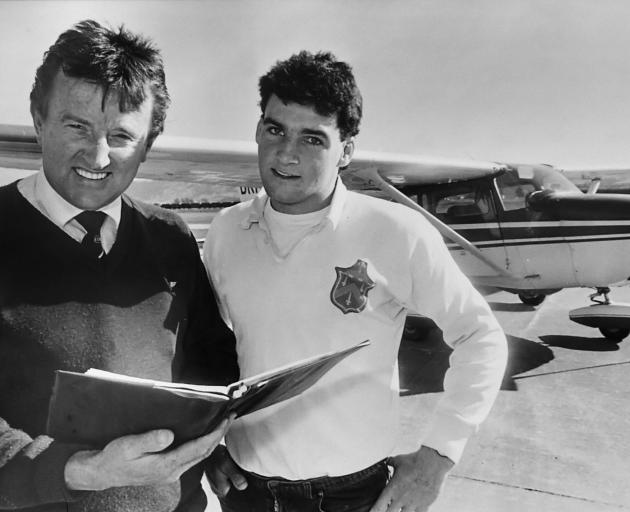 Otago Aero Club chief flying instructor John Penno (left) and Jonny Pagan in the ODT about 30 years ago, when Mr Penno was an instructor and trained Mr Pagan. PHOTO: STAFF PHOTOGRAPHER
He said Mr Penno had gone on to train many of his previous trainees’ children, and was highly respected within the industry.

Mr Penno said he was first drawn to the idea of flying when he was 11 years old, growing up on a farm in Dunedin.

"It was lambing time ... the lambs were too big and you have to get a hand in to pull the lamb out, you see, and you get covered in afterbirth.

"This agricultural pilot came in and landed ... he came up and introduced himself, I looked at my hand and then looked at his plane and I thought ... this."

He also remembered watching another pilot take off from their farm when he was a child, and he was "flabbergasted" by how big the plane was.

"I could see him disappearing over the horizon ...  and I just thought what a great way to get around."

Mr Penno said it was a "tragedy" to see many people in aviation losing their jobs, due to the impact of Covid-19.

He was also considering landing for good this year.

"When you get older you have got to be realistic and think, ‘I might not respond as quick as I could’."

While experience was on his side, it would be something he had to think about.

Mr Pagan said whether Mr Penno decided to retire or not, his “immense” contribution to the industry and about 25,000 hours of flying would not be forgotten.