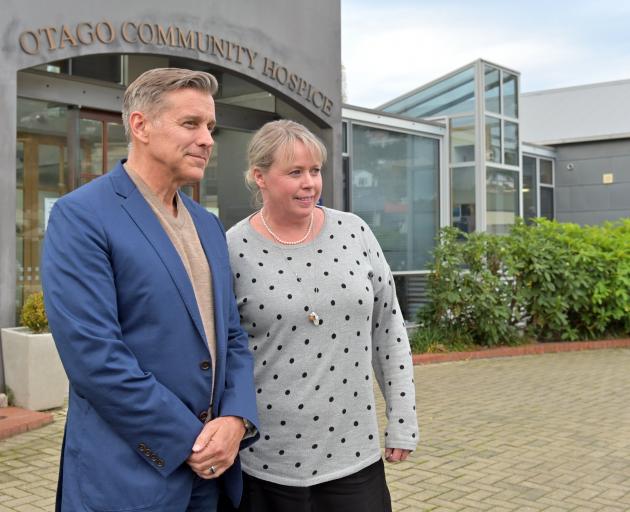 Planning a new pilot scheme for home-based palliative care are Otago Community Hospice clinical leader David Butler and chief executive Ginny Green. PHOTO: LINDA ROBERTSON
Otago Community Hospice is developing a pilot programme where family caregivers will be given training to help care for their loved ones at home.

The pilot is an expansion of the hospice's Kowhai Programme, which twice yearly offers information sessions for carers.

"People were missing out because of timing issues and the uptake had skyrocketed and we simply didn't have the capacity, and we do believe there is a gap there for people who are not ambulatory and cannot get in here," OCH chief executive Ginny Green said.

"We decided it would be smart to reallocate some of those resources in to piloting something like that in people's homes."

Such a shift would mirror the long-running trend for hospice to be giving care in people's homes rather than in its own care facilities: only 2% of OCH patients are in the North East Valley building at any one time, and unutilised inpatient care resources could be diverted to outpatient care.

"One of our key responsibilities as a specialist provider is to increase confidence, capability and capacity across the wider sector," Ms Green said.

"If you look at the aged-care workforce in its totality, one of the biggest ones is informal, unpaid caregivers in the community, and we need to make sure they are equipped to look after people where the people want to be, which is mostly at home."

Ms Green believed the pilot would the first time a New Zealand hospice had offered a structured programme of in-home training for carers.

With the average age of New Zealand's population continuing to increase, she believed it was a move hospices would probably have to make in the future.

"We will be moving our resources to where the patients are ... a lot of what we are working out is the logistics of that."

OCH clinical lead David Butler said a set of characteristics had been drawn up to identify families which could benefit from the pilot programme.

"Things like recurrent triage calls to the after-hours line, medication needs, observations from our care co-ordinators in the home about, maybe, unsafe transfer techniques, falls prevention.

"It all sounds like simple stuff, but if you've not cared for someone in your home before there are some tricks and tools that for nursing staff are tacit knowledge but for someone who has not done that before it is foreign."

Dr Butler said he was confident the need for such training was in the community, but OCH wanted to make sure that was the case and that carers in the pilot were offered the help they needed.

"My sense is that the earlier we provide this help to caregivers the better," he said.

Hospice Awareness Week runs from May 13-19.

Ms Green said a range of activities were planned across Otago, the main event being the annual street appeal on May 17.

There is a need. Most people want to die in their home and most family members have had no prior experience of caring for a dying person. It's a great idea especially if backed up by advice and care from those who do.