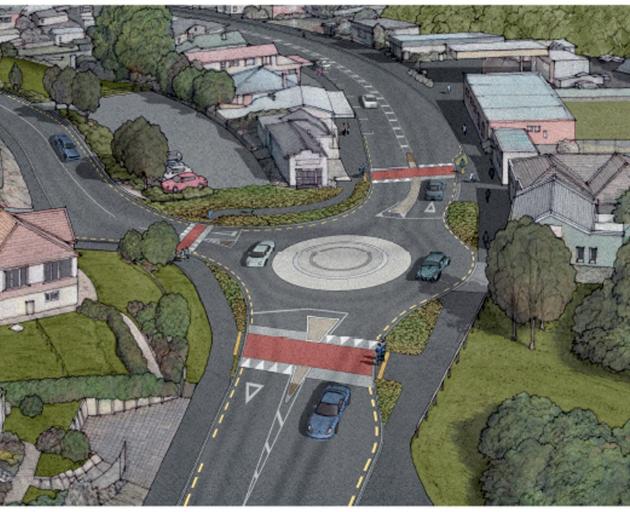 An artist’s impression shows the roading layout (below) at the northern end of Green Island, compared with what is proposed (above). The final design of a planned roundabout at the intersection of Main South Rd and Church St has yet to be confirmed. IMAGES: SUPPLIED
A new roundabout on the outskirts of Dunedin may cause more trouble than it is worth, businesspeople in the area fear.

The Dunedin City Council plans to build a roundabout at the intersection of Main South Rd and Church St in Green Island, and raise three pedestrian crossings in the suburb’s main street, at a cost of about $1.2million.

Construction is set to start in January and is expected to be finished by June next year.

Nine parking spaces would have to be removed.

Greater Green Island Business Association president Antony Duthie was unconvinced the design was a good match with what the area needed. 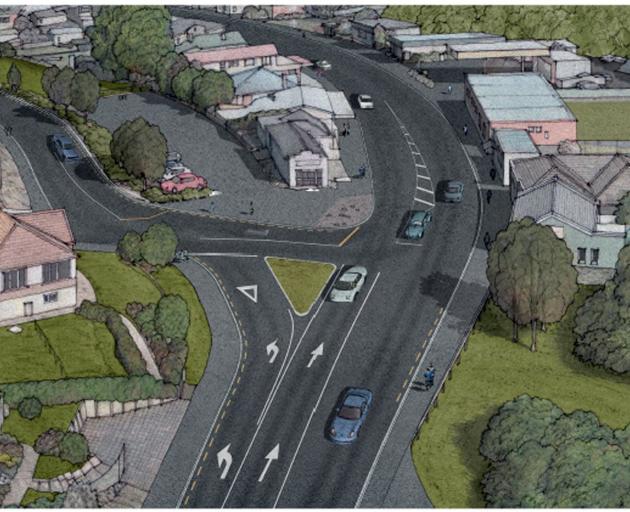 Crossings by the planned roundabout would be added in an area not known to need them.

"Does the extent of what they’ve designed have to be done?"

The Night ‘n Day shop is near the planned roundabout, and Mr Duthie was worried about a squeeze on available parking.

He doubted the council was listening to people in the area.

Across the road at the Green Island Maintenance Centre, Daniel Marsh was worried the new layout could pose problems for heavy traffic accessing a driveway.

"A roundabout is our preferred option for this intersection to reduce speeds and provide safer traffic movement between Main South Rd and Church St," she said.

"Buses will be able to use the roundabout to U-turn, instead of travelling along existing narrow streets to turn around."

Raised crossings at each of the roundabout’s exits would encourage slower traffic, she said.

The final design was yet to be confirmed.

Ms Benson said feedback had resulted in changes to the design.

If they wanted to slow traffic why not reduce the speed limit to 30kph? In the end with all the round abouts and speed bumps in place in Dunedin the average speed limit will be 30kph.

International and local experience shows that people frquently ignore posted speed limits if the road design allows higher speeds.
The sections of Main South Rd past Sunnyvale are 50kph, but I see drivers doing well over 50 along there every day.
The proposed site for this roundabout frequently has drivers overtaking on the outside, crossing the center line on the rise as they head in Green Island, despite the parked cars with shoppers either exiting or loading - its amazing how many people load their cars from the roadside instead of the footpath - and vehicles slowing to turn into the petrol station. A posted 30kph is good but needs the road design to reflect that.

Why are small business owners also expert in traffic management? Seems to be a necessary qualification for operating a business. Similar thing to George St, so many traffic experts.

So continues the DCC’s crusade to force us out of small cars and sedans into big 4WD so we can negotiate the proliferation of speed humps.

Why is anyone even remotely surprised that DCC are removing parking, throttling traffic and making movement as difficult as possible? This is simply standard form.

And as for negative impacts on business, the greens simply do not care about any business, small or large. So long as the amount of traffic is reduced then all is good. If business owners can't pay DCC over the top rate rises then that is obviously caused by something owners have done wrong, it couldn't possibly have anything to do with DCC actions.

I'd agree with you, but then we'd both be wrong :-) ...
Greens are all for small, local businesses.
There was no indication the roundabout would reduce traffic, merely make the intersection safer.
Whenever I pass through here, there are always car-parks free. Even more so on the side roads, so I don't think the indicated reduction is likely to have much of an impact.
And this is a high pedestrian area with people crossing the roads all the time. Slower traffic speeds are logical and quite justified.
Making the roads safer for all forms of transport isn't so much an 'attack on motorists' it is merely redressing the imbalance cars have had in their favour for decades.

It is a simple thing that you and other greens simply don't grasp. Cars don't occupy roads. People using cars do. Every time you and one of your ideas blocks vehicle access you block people access. If people can't acess an area they will go else where, taking their trade and patronage with them.
No time soon will an aged pensioner be riding a bike or a scooter from Abbottsford to Green Island to go shopping. Niether will they go from Maori Hill to George St by bike. No, they will simply drive elsewhere, probably further. And the areas you pretend to support will wither and die.
Just plain anti motorist thinking. And anti business.