Planning for the city's future 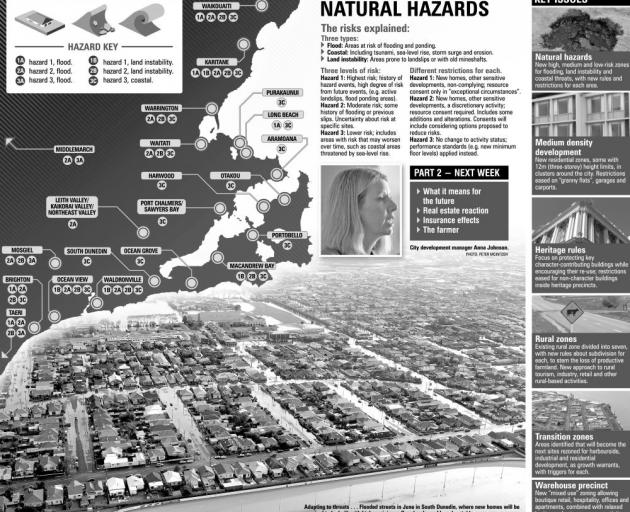 Property owners face new rules but the city's heritage is in for a boost, as the Dunedin City Council pushes ahead with a new district plan for the city. Chris Morris and Craig Borley report in the first of a two-part series.

Thousands of properties across Dunedin will be covered by new rules designed to protect against natural hazards.

But, according to Dunedin Mayor Dave Cull, the city needs to face up to the threats. Doing nothing is not an option.

''If there is a risk there, not talking about it doesn't make it go away,'' he told the Otago Daily Times late this week.

Mr Cull was commenting on the proposed second generation district plan (2GP), which passed a major milestone when the latest version was released for public consultation earlier this month.

And, at 1600 pages long, it is a monster - setting rules covering everything from flooding, landslip and tsunami threats, to the reuse of heritage buildings, residential development and the protection of rural land.

The plan has already ruffled feathers from the Taieri to the inner city, amid concerns about the impact on property prices, insurance premiums and future development plans.

Mr Cull said the plan would play a ''hugely significant'' part in shaping the city's future.

But, while new rules would be contentious for some, when it came to natural hazards, the council had to act, he said.

''The reality is ... they are recognised risks. We have an obligation to identify them for the benefit of not only the people who own the properties now, but anyone who might own them in the future.''

''Any place where change is proposed, people are going to have concerns. That's just a general rule - change makes people nervous.''

But she emphasised the rules sought to control new development and would not force changes to existing homes and properties.

So what can residents find in the document, and should you be worried?

One of the biggest changes was proposed to manage development in areas under threat from natural hazards.

Each threat was ranked from 1 (the highest level of risk) to 3 (the lowest), with different rules for each.

At the most extreme end, new homes would become ''non-complying activities'', meaning resource consent would only be given in ''exceptional circumstances'', while lesser restrictions applied at lower levels.

The biggest impact would be felt in Macandrew Bay, where hundreds of properties would be covered by a new ''hazard 1'' land instability zone.

Other parts of the suburb were in the ''hazard 2'' land instability zone, which acted as a buffer zone where there was uncertainty about the extent of known landslips.

Development in the buffer zone would face extra restrictions, including the need for geotechnical assessments ahead of any expansion plans.

But the buffer zones were needed because of the difficulty mapping the precise boundary of a landslip, Dr Johnson said.

''It's underground. It's unlike a flood, where you can have photos and you can see it above the ground ... it's much harder to draw an accurate line, so they've added in the margin of error.''

Some flood-prone parts of the Taieri would also see new homes become a non-complying activity, making it ''almost impossible'' to obtain resource consent.

The council could not prohibit development, but consents would depend on ''how far people are willing to go'' to mitigate risks.

In other parts of the Taieri, Karitane and Waikouaiti, new homes would be permitted as long as new design standards - such as raised floors or relocatable homes - were included.

Dr Johnson said hazard information was collated by the Otago Regional Council and was not new, having appeared on property LIMs and available to insurance companies setting premiums, she said.

''The only thing that's changed is it's now in the district plan,'' she said.

What impact the new approach would have on property prices was ''crystal ball stuff'', but hazards were present across New Zealand, she said.

''Dunedin is not unique in having a lot of areas covered by natural hazards,'' she said.

The plan could also herald the arrival of new medium density housing in parts of the city, as part of a new ''general residential 2 zone'' covering parts of the city's hill suburbs, Northeast Valley and South Dunedin.

An ''inner-city residential'' zone, covering areas between the town belt and CBD, as well as the student quarter, would also allow medium density development up to a new height limit of 12m.

That was an increase from the existing 9m limit, and would allow two-storey buildings to become three storeys.

It would also become easier to build family ''granny'' flats in all other parts of the city except the medium density areas.

Dr Johnson said the changes aimed to accommodate the city's demographic shift towards an ageing population, which was ''one of the key issues facing Dunedin''.

Developers were indicating rising demand for high-end medium-density projects in different parts of the city, from the inner city to the suburbs, she said.

The proposal would make some people ''nervous'', but residents should not expect to be crowded out by high-rise student apartments popping up next door, Dr Johnson said.

Any change was expected to be gradual, in keeping with its surroundings, and deliver high-quality designs, she said.

''I can understand people have concerns ... we want quality-designed, medium-density housing, and I think the market wants that as well.''

Changes aimed to address the ''major'' threat of demolition by neglect in Dunedin by making it easier to put old buildings to new uses.

Buildings identified as ''character-contributing'' within heritage precincts would require resource consent for changes, as would particular heritage items within them.

But, at the same time, exemptions would allow new forms of retail, office and other uses inside scheduled heritage buildings, Dr Johnson said.

That aimed to encourage owners to justify investment in their properties, and was part of a fundamental rethink of the best way to preserve the city's heritage, she said.

''The current plan is looking at heritage almost as something you need to ...wrap up in cotton wool and protect.

''The new plan is recognising that the best way to protect heritage is to promote the ongoing use and maintenance of buildings.''

The Warehouse precinct would also benefit from a rezoning from ''large scale retail'' to a new ''mixed use'' zone, allowing boutique retail, hospitality, office and apartment developments,she said.

Other changes would make it easier for ''less attractive'' buildings inside heritage precincts, deemed not to contribute to the character of the area, to be improved - or removed.

Dunedin's rural hinterland was also in for a shake up, as the city's existing rural zone was set to be divided into seven separate zones with new rules for each.

Each zone would each have new rules limiting the subdivision of rural land, in an effort to tackle the loss of productive rural land to subdivision creating lifestyle blocks, Dr Johnson said.

That would push the minimum size for a rural subdivision out from 15ha to 25ha, and even further in some parts of the city.

On the Taieri, the minimum would increase to 40ha, while in the Middlemarch Basin it would go up to 80ha, and to 100ha on the city's hill and high country.

The change needed to be seen as part of a ''package' that also made it easier for farmers to subdivide off surplus dwellings, or use family flats for workers' accommodation.

The new plan also recognised the place of rural retail, tourism, industry and other activities associated with parts of the rural zone, which were overlooked by the existing approach.

Despite that, Dr Johnson acknowledged the proposed new rules for subdivision were dividing opinion.

''It's fair to say that some rural property owners who may have hoped to be able to fund their retirement from subdividing up their farms are not happy, and we've certainly heard that.''

• The public has until November 24 to make submissions. Detailed information about the 2GP is available on the council's website.