Plea for care at crossings 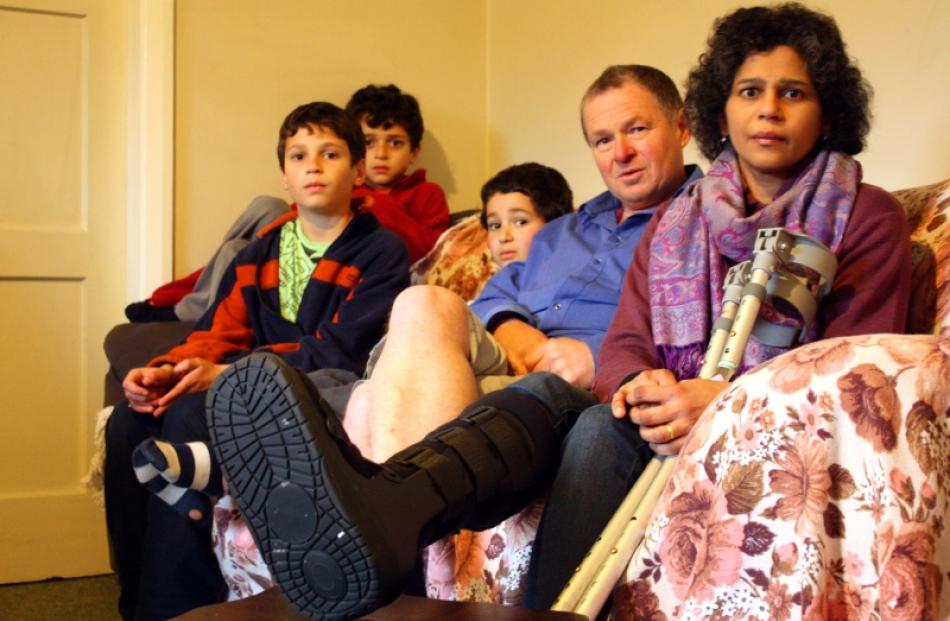 Ahila James recovers at home with her family (from left) Abihinath Berry (12), Vis Berry (11), Srinath Berry (7) and Robert Berry after being hit on a pedestrian crossing outside of Wakari Primary School last month. Photo by Tim Miller

A Dunedin woman hit while crossing the road wants motorists to take care around pedestrian crossings - especially near schools.

Ahlia James said she was on her evening walk early last month when she was struck by a van at a pedestrian crossing in Helensburgh Rd, outside Wakari Primary School.

Mrs James suffered a broken leg and bruising to her right arm, is still in a brace and needs to use crutches to get around. With two children attending Wakari School, Mrs James said her main concern was for the pupils using the crossing before and after school.

Wakari Primary School principal Chris Smith said there had been issues with the crossings outside the school on both Helensburgh Rd and Shetland St for many years.

Earlier this year, a pupil was hit by a van while on the crossing. The driver was able to slow down enough not to cause serious damage, Mr Smith said.

''The roading system around the school is a bit of a shambles and, as good as our parents are at being cautious, the risk of someone getting hit is always there.''

Both crossings had stop lights hanging across them and there was always a parent supervising them after and before school, Mr Smith said.

The Dunedin City Council had been working with schools that used crossings that were seen as high-risk. Wakari School was one of them.

Council safe and sustainable travel co-ordinator Charlotte Flaherty said the council was in the process of assessing individual schools and was working with the schools at highest risk.

As part of the work around pedestrian crossings, the council talked to schools about the perceived environment and what could be done to improve safety, Mrs Flaherty said.

Both pedestrians and motorists needed to be aware of what was happening around crossings, particularly around schools, she said.