'Plop architecture' among litany of criticisms 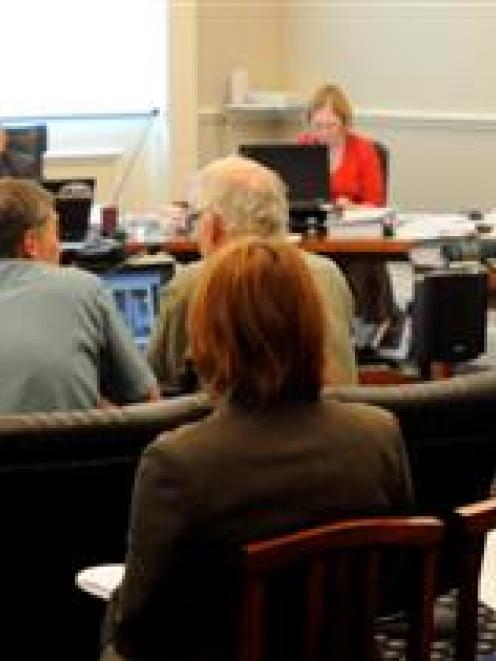 Submissions to the Dunedin City Council hearings committee on the proposed Wharf St hotel continued yesterday. Photo by Gregor Richardson.
The design of a $100 million hotel proposed for Dunedin's waterfront has been labelled ''plop architecture'' as opponents lined up to criticise the project during a sometimes testy public hearing yesterday.

The criticisms came as a Dunedin City Council hearings committee considered the fourth day of submissions on Betterways Advisory Ltd's bid to build the waterfront hotel on vacant industrial land at 41 Wharf St.

Descriptions of the hotel's ''communist'' and ''banal'' design were left ringing in committee members' ears as a steady procession of individuals and groups made their cases in person yesterday.

Many arguing against the project stressed they were not anti-development - just against the hotel as proposed.

That included a joint submission by staff from the University of Otago's geography and applied sciences departments, who argued consent should be declined.

However, one member of the group, senior lecturer Dr Mark McGuire, suggested that replacing the unimaginative ''glass box'' with an improved design could yet retrieve the project.

An example of what could be achieved was the West Plaza tower on Auckland's waterfront, which also stood beside low-rise and heritage buildings but was considered the city's best architectural example, he said.

Dunedin had only one chance to ensure the hotel's design was good, rather than accepting the ''plop architecture'' proposed.

''We think this is probably the most important building that will be built in Dunedin in the foreseeable future.

''The level of design ... needed from the architecture isn't there.''

A council planner's report has recommended consent be declined, but suggested the hotel's design be referred to a panel of experts if the committee decided to grant consent.

Other speakers yesterday were adamant the hotel was unwelcome in Dunedin - anywhere, in any form - and exchanges grew heated as Dunedin property developer Jeff Dickie argued against the hotel.

He suggested ratepayers would end up footing the bill if the hotel proved uneconomic, ''which is likely''.

''There's no reason this hotel will be ring-fenced against ratepayer liability,'' he said.

Cr Colin Weatherall interjected, pointing out the consent process was independent and the council had offered no funding for the hotel.

''I'm just worried this is going to turn into another one of those flops,'' Mr Dickie persisted.

''Your assurances give me very little comfort.''

Former Dunedin deputy mayor Dame Elizabeth Hanan said the hotel would create a ''hefty vertical barrier'' on the waterfront, and ''few cities in the world would allow such a massive destruction of their heritage''.

Her husband, Murray Hanan, suggested that if it proceeded, the developers be required to pay a bond to cover the cost of completing, or demolishing, it if construction stalled. Otago Regional Council representatives, including solicitor Alistair Logan and ORC corporate services manager Gerard Collings, detailed concerns about shading on their properties, and other problems, during a two-hour presentation.

Consultant surveyor David Smeaton, appearing for the ORC, presented graphics showing shadows would be more significant than depicted in modelling presented by Betterways. Shadows would be cast over parts of Customhouse Quay from each afternoon year-round, and part of the Customhouse Restaurant would be shaded from early evening from September to March.

ORC counsel Alistair Logan said the hotel's visual impact was reason enough to reject the consent application, but Betterways director Steve Rodgers had indicated no downsizing would be considered.

That made the company's proposal an ''all or nothing'' bid and ''given that choice, there is only one answer - nothing'', Mr Logan said.

Simon Parker, from the New Zealand Institute of Architects Southern Branch, said the hotel would block views and destroy the character of the area, and Paul Pope, of the Dunedin Amenities Society, said it would dominate the landscape in a way ''not seen in Dunedin before''.

Dunedin woman Liz Rowe believed buildings needed to ''respect each other'' and the hotel should enhance Dunedin's appeal, not threaten to ''destroy'' it.

Robert Cunninghame said the hotel would be ''out of place anywhere'' in Dunedin, while Dennis Dorney believed the city should encourage industry rather than allow a hotel on scarce industrial land.

The committee also heard from other opponents, including Islay Little, who said allowing ''mostly ugly'' office blocks around the Octagon ''does not justify another architectural disaster'' on the waterfront.

John Milburn, of Monarch Wildlife Cruises, was the only submitter to speak in favour of the hotel yesterday.

He pointed to the economic benefits the hotel's construction and operation would bring, insisting any investment of $100 million in Dunedin ''should be welcomed with open arms''.

The hotel would also put an ''eyesore'' of vacant industrial land to good use, and the pedestrian bridge that might follow only made the project more attractive, he said.

''We have got a wonderful, wonderful harbour ... it's arguably the most beautiful harbour in New Zealand, and people can't get to it.''

The hearing adjourned at the end of yesterday's session but will resume on December 17 for up to three further days of submissions.