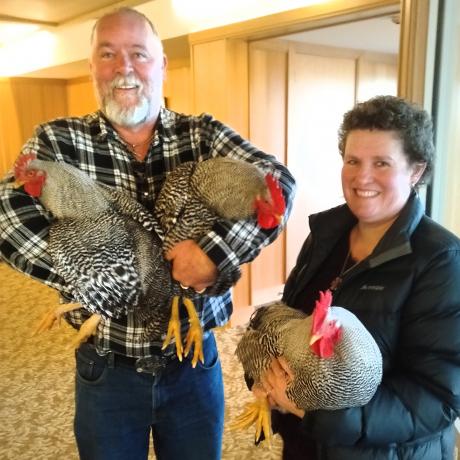 Bird fanciers Calvin Hooper and his wife Liz take these roving roosters to their new home. PHOTO: SUPPLIED
In a happy ending to crow about, three "gorgeous" big roosters have been spirited away from a Dunedin rest-home to an impeccable new life at Blackhead.

"It's great to know such lovely creatures are headed to pastures rather than the pot," Leslie Groves Hospital facility manager Max Reid said yesterday.

The three Plymouth Rock roosters came striding into the grounds of the hospital in Wakari about two weeks ago.

Their provenance was unconfirmed but it was believed the "gorgeous, big, huge and long-legged" trio had been dumped, Mr Reid said.

The friendly birds had charmed most of the residents, but after two weeks, the early crowing and the odd other foible meant their nuisance value was starting to outweigh the novelty, he said.

However, after an Otago Daily Times report yesterday featured the need for a good home, bird fancier Calvin Hooper and his wife, Liz, swooped, and brought the roosters safely to their 4ha hobby farm at Blackhead.

"I'm rapt that we've got them and they can just wander around the farm," Mr Hooper said.

He already has more than 80 birds, including a Plymouth Rock hen, and plans to return to bird showing.

He plans to use one rooster for breeding, and allow the others to range freely around the coastal farm.

The three roosters may have left their former home, but have already become mini media stars.

Mr Reid joked that, apart from the ODT interest, "the story still has legs" because he had also been interviewed on RNZ National radio yesterday about the colourful visitors.

Mr Hooper said he had plenty of roosters and loved when they crowed close to his room each morning.

If the birds had not been uplifted by a bird fancier they could well have been in a cooking pot "tonight or tomorrow".

"That would have been a complete waste of a bird.

"It's an absolutely brilliant ending."