By Daisy Hudson
0 Comments
Cannabis, Black Lives Matter, tourism and the economy were all up for discussion during an at times fiery political debate in Dunedin yesterday.

Politicians from four of the five parliamentary parties took part in the wide-ranging debate on the Covid-19 response at the University of Otago.

The event, organised by the Otago University Debating Society, attracted a large crowd.

One of the key issues was how best to manage the post-Covid recovery.

Green Party co-leader James Shaw said the Covid situation presented both an opportunity and responsibility to invest in issues such as climate change, protecting nature, and reducing poverty. 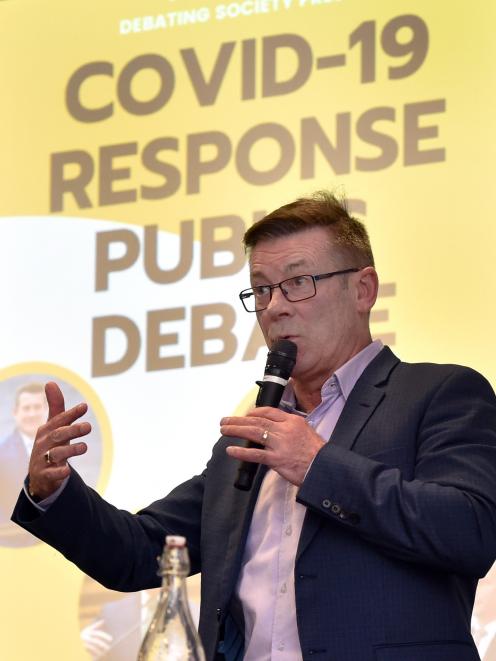 National MP Michael Woodhouse makes a point at the Covid-19 response debate at the University of Otago in Dunedin yesterday as a large crowd listens. PHOTOS: PETER MCINTOSH

There also needed to be support for those impacted economically by Covid, through no fault of their own, he said.

At the other end of the table were Dunedin-based National health spokesman Michael Woodhouse and Act New Zealand leader David Seymour.

Mr Woodhouse said a key way to help the economy was to "get the country going as quickly and as safely as we can".

"If we were to open too soon and put risks in that we had to shut down again, that is a tremendous economic risk that’s currently being managed in a very conservative way.

"We would suggest to you that there is other alternatives to that, which does involve opening up safely and carefully, because you’re not spending money on the people losing their jobs, the focus has to be on preventing job losses in the first place."

Mr Seymour saw reason for optimism, saying the pandemic presented an opportunity for New Zealand in that skilled people would want to return to the country due to its success in fighting Covid-19.

"Being an isolated country is possibly one of the best blessings we’ve ever had."

When asked about the potential impact of the cannabis legalisation referendum, three of the four speakers revealed they would vote in favour.

Dunedin Green Party candidate Jack Brazil subbed in for Mr Shaw, who had to leave to catch a flight.

Mr Parker did not believe legalisation would significantly change rates of cannabis use, or have a major economic impact either way.

Mr Seymour said he was voting "yes" because he worried that people who sought cannabis on the black market were turning to methamphetamine when it was not available.

Mr Woodhouse was the lone critic, saying the cost of legalised cannabis after taxation and licensing fees would drive people to the black market anyway.

"The simple question I will be answering before I go to the ballot box is, as the health spokesperson and hopefully future Health Minister, is will the health of New Zealanders be better or worse as a consequence of legalisation?"