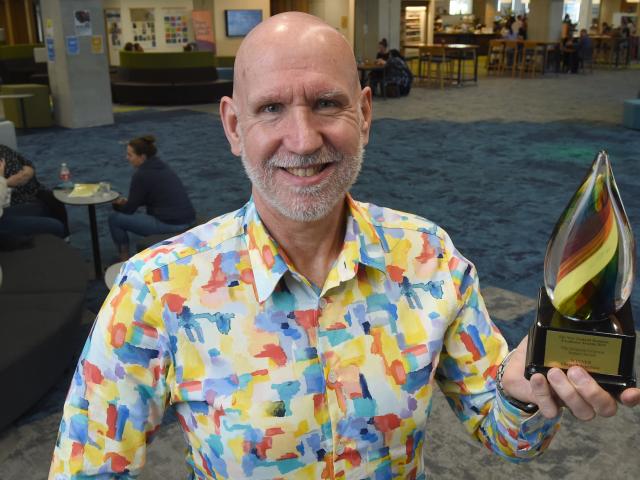 Stuart Terry
Bringing your "whole self to work" is what Otago Polytechnic wants to promote when it comes to the LGBT community.

The polytechnic's work boosting diversity was recognised with a colourful award at the Rainbow Excellence Awards in Auckland on May 17.

The Simpson Grierson Award was handmade from glass shot through with rainbow colours.

The polytechnic was the first in the country to receive the "Rainbow Tick" - recognising the way it caters for and welcomes LGBT staff.

Polytechnic organisational researcher Stuart Terry said the award recognised policies at the polytechnic which reflected the diversity of the community - including an "allies network" between LGBT staff and others who were not LGBT, but were sympathetic.

The polytechnic did not collect numbers of students who identified as part of the rainbow community, Mr Terry said.

"What we are looking at is how all of the students, irrespective of gender, can be who they want to be and succeed."

He was proud the polytechnic had built up a strong culture, over many years, of being inclusive and supportive of all staff and all students.

The polytechnic was also nominated for the Supreme Award, which went to the Auckland War Memorial Museum.