A fire investigator will today begin work to determine what caused a major fire in Dunedin that made a Portobello home uninhabitable and caused the evacuation of multiple nearby properties.

Emergency services were called to the blaze in Beaconsfield Rd about 4.30pm yesterday. No one was injured in the blaze and the young family with three children renting the home had evacuated. 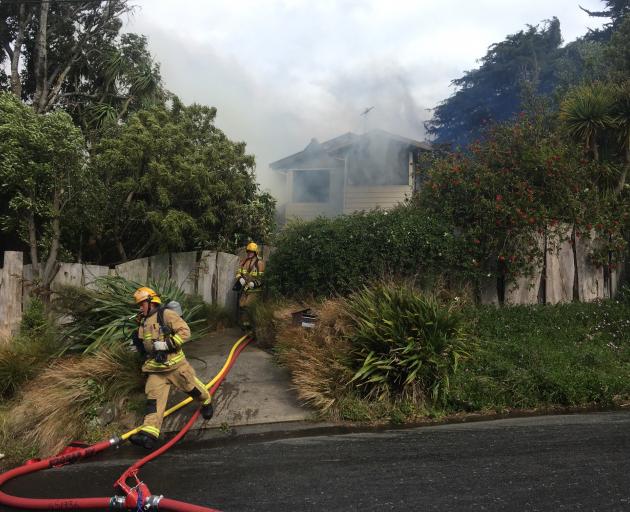 Crews were called to the fire in Beaconsfield St about 4.30pm yesterday. Photo: Gerard O'Brien
The large house, as well as neighbouring macrocarpa trees, caught fire.

However, after arriving at the scene he said the fire's cause had yet to be determined and the home was now uninhabitable.

Though the fire was brought under control by 7.30pm, strong winds meant the threat of further flare-ups remained possible.

Fire and Emergency NZ duty shift manager Brent Dunn told the ODT today that heavy rain on Saturday and overnight had made a difference helping to dampen down hotspots.

Three crews from Dunedin and St Kilda remained at the scene overnight.

Mr Dunn said a thermal imaging camera was used at 6am to do a search for traces of further hotspots and a fire investigator would be on site today.

The owner of the Beaconsfield property, Heather Morris, said she and husband Warren purchased the home in 1989 to live in, but had been renting it out recently.

She said the blaze had spread to macrocarpa trees on the boundary, destroyed the outside shed and totalled the house.

She said the young family had "lost absolutely everything."

A total of 28 residents from 14 homes were evacuated to Portobello's Coronation Hall on Saturday night for a time before they returned to their properties.

Peninsula Board chair Paul Pope arranged dinner for the evacuees.

A spokesperson for Otago Civil Defence and Emergency Management said today that one person stayed elsewhere overnight due to smoke in their house.

A givealittle page has been set up for the young family and by 2pm today $5700 had been donated.