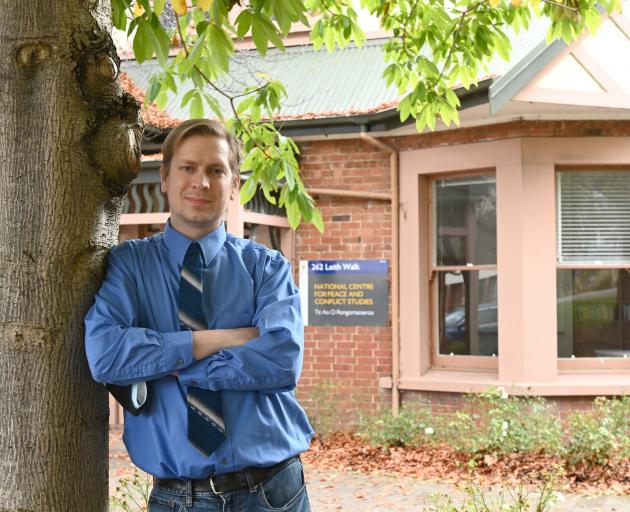 The safety-conscious 36-year-old is in the final stages of completing a PhD in peace and conflict studies at the University of Otago, and plans to travel to Peje, Kosovo in August to start a seven-week training programme.

While learning to disarm landmines is not on most people’s bucket lists, Mr Fuller said it had been on his since his best friend was shot and killed by a police officer in the United States in 2006.

"He had a horrible death.

"When he died, it really instilled in me this sense of wanting to do things that help people, and if I could prevent or somehow save people from dying the way that he died, make the world a little less violent so that there are less people having to feel the pain that I felt, then that would make the world a better place.

"Once I saw that this kind of work [disarming landmines] existed, I thought to myself, this could really make a difference.

"This could really change things for a lot of people, because everybody that steps on a landmine is basically like my friend — they die this horrible, violent death that is totally unforeseen, totally accidental.

"When you make sure there’s not a landmine for them to stand on, then you’ve prevented it, and that’s what matters to me."

Mr Fuller said it was a dangerous job but he was confident in the training and safety practices he would receive in Kosovo.

"I’m doing a very thorough programme. They teach you how to use a metal detector, work with dogs, and how to disarm the explosives using the proper protocol.

"I definitely don’t think of myself as a brave person."

At completion of the course, he will hold an explosive ordnance disposal (EOD) qualification.

Use of landmines was banned in 1998, but they were still a massive problem, he said.

There are 61 countries around the world which are contaminated by landmines, and his long-term plan is to work for an organisation that helps to remove them.