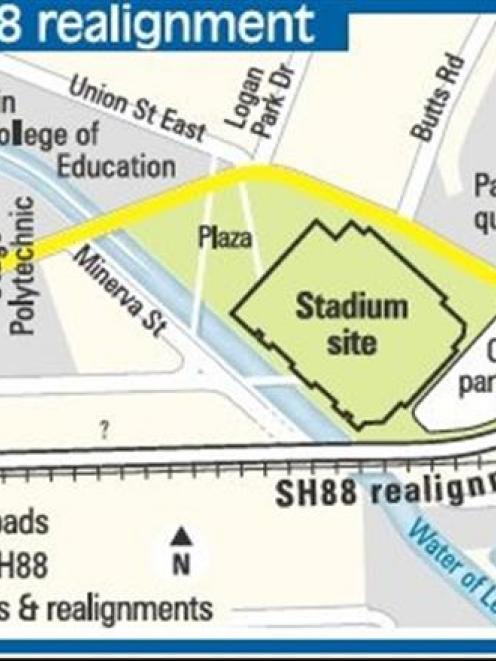 The Dunedin City Council is still locked in talks with Scenic Circles Hotel chairman Earl Hagaman over land needed for the realignment of State Highway 88 past the Forsyth Barr Stadium, just months before construction is to begin.

Council property manager Robert Clark has been negotiating to buy land needed for the project from East Parry Investments Ltd, of which Christchurch-based businessman Mr Hagaman and wife Lani are the shareholders.

The land was needed for the $10 million realignment of a 1.1km stretch of SH88, which would run from Frederick St past the stadium site, construction of which was due to begin by April and be completed in 2011.

However, Mr Clark confirmed, when contacted, yesterday he was still in talks with two parties over the land, and the sale price remained a factor.

Deals involving unspecified sums had been concluded with three other parties, but Mr Clark declined to name them or reveal the value of the deals, citing continuing commercial sensitivity.

He would also not confirm whether East Parry Investments Ltd was one of the parties yet to agree to terms.

However, a spokeswoman for the Hagamans confirmed, when contacted, their negotiations with the council were continuing without an agreement, and said the pair were now "considering the options".

"Nothing has been finalised and they are just considering the options at the moment," she said.

Mr Clark also declined to say how much the council was prepared to spend to secure land for the realignment, as price was still an issue and "there's a certain level of movement there I have to have".

However, he did not believe the sides were too far apart.

"There's plenty of evidence of prices of sales of industrial land to give us a basis for negotiations," he said.

A completed detailed design for the realignment would depend on a successful conclusion to the council's negotiations to buy the land, but Mr Clark said he was "pretty confident" of securing all required deals within three months.

The council also had a "reasonable amount of flexibility" in continuing with some parts of the project while delaying others while talks progressed, if required, he said.

Council project engineer Evan Matheson said, when contacted, the realignment was expected to cost about $10 million, offset by a confirmed 65% subsidy from the New Zealand Transport Agency.

That meant the council's share would be $3.5 million, while NZTA paid $6.5 million but would take control of the road once completed, he said.

Opus International had been contracted to complete a final design before a tender for construction was announced, which was expected in March next year, he said.