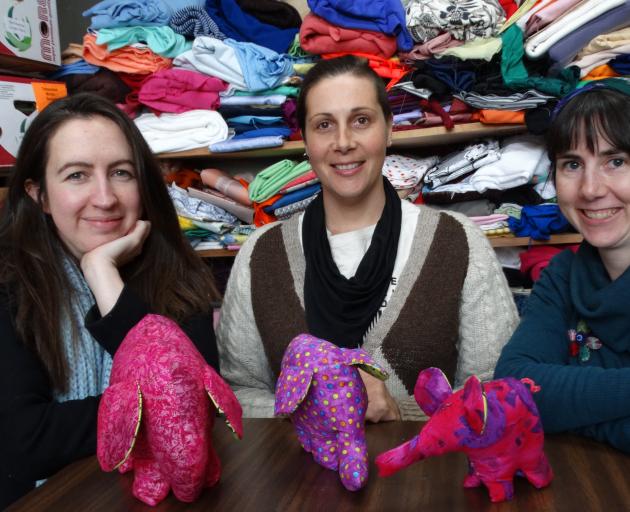 Stitch Kitchen co-ordinators Fiona Clements and Fiona Jenkin were inspired to create the project in light of the national conversation about textile waste, ethical fashion and de-cluttering.

Second-hand shops across New Zealand were being forced to dump record levels of donated used clothing - at their own expense, Ms Clements said.

Last year, Dunedin's waste management review reported that the city's textile waste had doubled in the preceding 12 months, more than 4000 tonnes of textiles having gone into landfill.

"Creative thinking is key to any kind of problem-solving,'' Ms Clements said.

Elephants were important to their native ecosystem, and Stitch Kitchen wanted the project to do similar things locally.

"Elephants are really cute too - we think everyone will want to make one.''

A series of 4KT Elephants workshops will be held in June, starting at Queen's Birthday weekend and Stitch Kitchen will create a craft space in a vacant George St commercial space sourced by the Dunedin Dream Brokerage.

Dunedin Dream Brokerage broker Kate Schrader was excited by the 4KT Elephants project, saying it stood out for the way it presented "a creative solution to a `mammoth' issue''.

Ms Jenkin said the issue of textile waste could be overwhelming for people, so making the toy elephants would give people a "tangible and fun'' way to be involved in the solution.

"We hope that people will feel they are making a contribution, having fun and also learning sewing skills,'' Ms Jenkin said.

Sewing experts would be on hand throughout the workshops to advise people on ways to reduce textile waste by minimising wear and tear on their clothing and making repairs when needed.

People who take part would be able to keep their individually numbered elephant, or could choose to give them to the Tedz Project, a local charity which provides care packs for children who have been through trauma.

The Environment Envoy pop-up will be a good way for Stitch Kitchen to launch the 4KT Elephants project, but they are expecting it to take time to reach the 4000 target.

"We are looking at running future sessions, perhaps in South Dunedin, once we have the project under way,'' Ms Clements said.