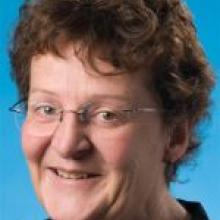 Elspeth Gold
A protein found in the prostate gland could hold the key to developing a more accurate screening test for prostate disease, University of Otago researchers say.

The promising research focuses on clarifying the role of a recently-discovered growth regulator called activin C.

This protein is also a potential therapeutic target that could one day be used to combat invasive prostate cancer.

Dr Elspeth Gold, a University of Otago graduate who is principal investigator in the research project, said that the scientists involved were "incredibly excited" about the activin C research.

The fact that Otago University biomedical researchers had recently gained $950,000 in funding from the Health Research Council of New Zealand showed that the three-year research project was considered promising, Dr Gold said.

"It looks like we're on the right track," she observed.

The three-year project was focused on the likely role of activin C in promoting prostate cancer growth.

About one in four New Zealand men aged over 55 would suffer from some form of prostate disease, statistics showed.

Prostate cancer was the most commonly diagnosed form of cancer diagnosed in males and was the third highest cause of cancer-associated deaths in New Zealand in 2004.

Activin C was a naturally occurring protein in the prostate gland, where it played a part in regulating cell growth.

When present at increased levels, the protein disrupted the normal regulatory mechanisms in the prostate, which led to abnormal cell growth, Dr Gold said.

Dr Gold and her fellow researchers hypothesised that in such instances activin C had the potential to promote prostate cancer development.

Dr Gold, who is a Research Fellow at the Monash Institute of Medical Research, at Australia's Monash University in Melbourne, said the planned basic research would help determine whether activin C was circulating in the bloodstream, and whether it could be useful as a more accurate diagnostic test for prostate cancer than the current PSA (Prostate Specific Antigen) test.

The PSA test does not discriminate between benign diseases and prostate cancers that will remain organ-confined, versus aggressively spreading metastatic prostate disease.

Early detection and timely treatment can reduce cancer mortality, hence the need to improve existing methods for the early diagnosis of prostate cancer.

Born in Balclutha, Dr Gold has an Otago doctorate in anatomy.

She will return to Dunedin in November to continue the research at the Otago department.

Dr Gold has been working with Prof Gail Risbridger at the Monash Institute for the past seven years.

The continuing collaborative research will also include Prof Risbridger and Prof Helen Nicholson, of the Otago anatomy department.