Protesters won't be 'bought off by one loo' 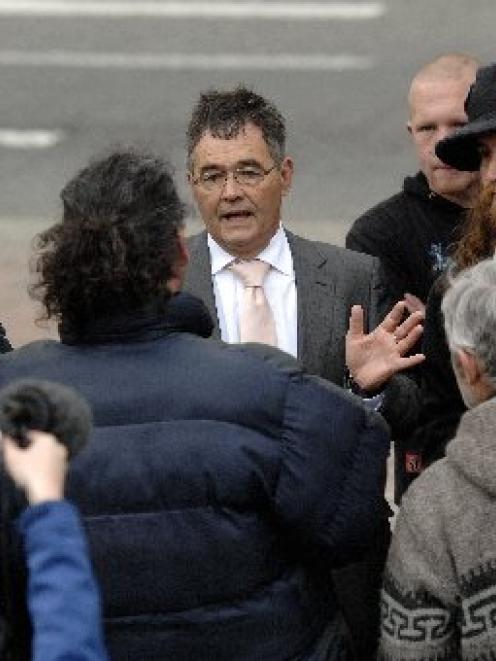 Dunedin City Council chief executive Paul Orders (left) and Mayor Dave Cull (centre) speak to a group of protesters and group mediator Bert Holmes (right) in the Octagon last night. Photo by Linda Robertson.
The Dunedin City Council has left "the ball" in the hands of protesters in the Octagon, following a peaceful meeting last night to discuss the length of their occupation.

Dunedin City Council chief executive Paul Orders and Mayor Dave Cull spoke to about 100 protesters in the Octagon, and asked them to decide among themselves, how long they intended to stay.

They were also invited to attend the council public forum tomorrow to air their views on capitalism.

In a show of support and good faith, Mr Cull and Mr Orders offered to supply a portable toilet for the protesters to use for "a couple of days", but made it clear the council did not want the protest to go on for weeks.

"We want to reach a mutually respectful agreement without heads butting and the police getting involved," Mr Cull said.

However, protester Derwin Smith said he would not be "bought off by one loo".

"We could be here for a couple of months, at least."

Mr Orders reminded those gathered that the Octagon was a community facility and others would want to use it sooner or later.

Mr Cull said he had received many phone calls from the public - some complimentary, others complaining about the occupation - but there had been no official letters of complaint.

Following the meeting, Mr Cull said a council staff member would be sent into the Octagon today to ask if the group had decided how long it would be staying.

The council would then make a decision on what action, if any, would be taken, he said.

Earlier in the day, protester Kieren Trass said the atmosphere in the Octagon had been "really positive" and the "awareness is starting to rise".

The occupiers had basic cooking equipment, supplies, water from the Speight's Brewery spring, and were using public toilets in Municipal Lane and in Queens Gardens.

"We are keeping the place spotless. It's cleaner now than when we arrived."

The protesters spent their days making banners, talking to passers-by, and discussing in small groups a range of topics.

Mr Trass said the protesters wanted to be a "collective" for the problems facing society.

"We believe we've got the right to be here and voice our concerns. We live in a democracy," he said.

"We are here to have that collective response and we will be here for as long as it takes."

John Menzies, of The Bead Shop, in the Octagon, said the protest had not affected his business.

"They've been fairly peaceful and fairly well behaved," he said.

The Dunedin action was one of many worldwide as the "Occupy Wall Street" protest spread.