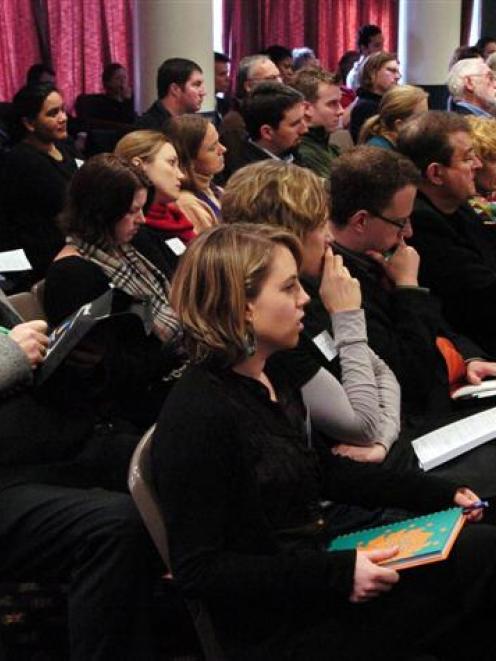 Participants at the University of Otago's latest Foreign Policy School, including university psychologist Dr Louis Leland (pictured in foreground, left) listen to a speaker at Salmond Hall on Saturday. Photo by Gerard O'Brien.
New Zealand's best interests could suffer if our leaders were merely "tied to the chariot wheel of public opinion", Dr Lance Beath, a former Foreign Affairs senior manager, warned during the weekend.

Dr Beath, a University of Otago graduate who is a Senior Fellow at the Centre for Strategic Studies, Wellington, was commenting during a debate on "More Power to the People" at the university's 43rd Foreign Policy School on Saturday.

Public consultation, or sometimes the apparent lack of it, has been a hot topic among the 110 participants at the school.

Dr Beath, who has held senior management posts at the New Zealand Ministry of Foreign Affairs and Trade and the Ministry of Defence, agreed that public opinion should be taken into account when foreign policy was being developed and implemented.

But simply allowing domestic opinion polls to drive every aspect of policy was not true leadership.

"That is a recipe for grave error and danger," he warned.

Such matters should not be decided only by sports fans at Carisbrook or in hotel bars, partly because of the likelihood of error and a lack of specialised knowledge, he said.

The public was "often wrong", and expertise and responsibility were needed in dealing with the often highly technical demands of foreign affairs work.

His opponent in the debate, Chris Trotter, who is a fellow Otago graduate and ODT political columnist, said in an interview that the foreign ministry had improved its consultation with the public.

But he believed that some senior bureaucrats both there and in Treasury still remained excessively suspicious of the views held by ordinary New Zealanders.

New Zealanders were happy for technical issues to be pursued by ministry staff, but when it came major matters which affected them, including big new trade agreements, people wanted more say.

New Zealanders were no longer happy to have key decisions taken for them by elite groups, including bureaucrats, he said.

Mr Trotter, of Auckland, urged people to become more involved in foreign affairs issues, to discuss matters of concern with friends, to write letters to the editor and to join political parties and lobby groups. 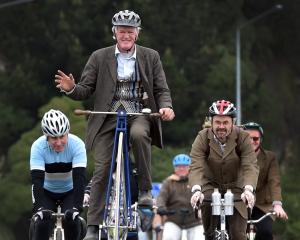