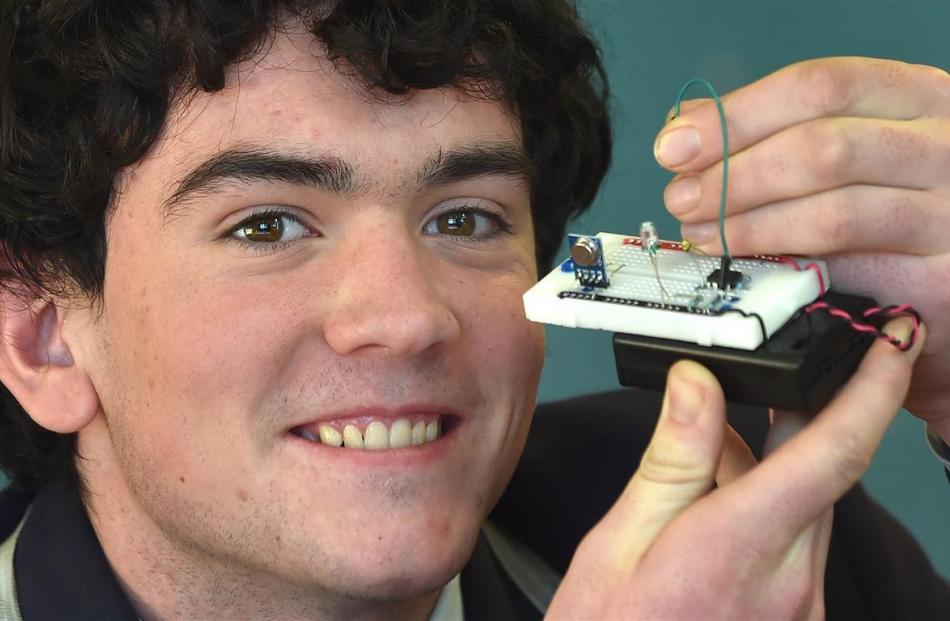 William Satterthwaite with a prototype circuit board which he hopes will control one of many sensors that will monitor and protect endangered wildlife at Orokonui Ecosanctuary. Photo by Peter McIntosh.

Give William Satterthwaite a circuit board and his eyes light up, not because he's accidentally touched a live wire but because he can use it for real-world applications.

The 17-year-old King's High School computer programming and robotics pupil is working on a year 13 digital technology NZQA scholarship project, which will be used to help protect endangered wildlife at Orokonui Ecosanctuary.

"When I started out, I was just hoping to get the scholarship. But now it's started to take on a life of its own.''

William said there were four gates within the ecosanctuary which separated the juvenile kiwi from the adult kiwi.

They were kept separate to stop the adults from picking on the juveniles.

Because there was no computer cabling in the native bush, limited cellular network coverage and no electricity to power his system, William had to come up with a workable solution.

"I've got programmable micro controller devices that I'm using to connect into the sensors on the gates.

"They will then be connected to small battery-powered radio devices which send alerts back to the ecosanctuary staff.''

William started working on the project at the start of the year, and since then, ecosanctuary staff have been finding other uses for his technology, such as measuring temperatures in tuatara burrows.

"It was always going to be for the ecosanctuary because part of the scholarship is to have a real-world application for the project. But it seems to be having more and more added to it as they [the ecosanctuary staff] find new ways for it to become useful.

"The whole idea of the system is, I'm making it modular, so that if they wanted to add another sensor for a gate or temperature reading somewhere else in the ecosanctuary in the future, they could easily add that in. It's future-proof.''

He hoped the system would be operational in September. Orokonui Ecosanctuary volunteer Tony Stewart was delighted with William's work.

"It's great that he's so engaged in the project. He's certainly put a lot of work and interest into it.''William said he was doing the project for good marks in his NZQA scholarship project, rather than money.

"Up until now, I haven't really had a connection with endangered animals. But now that I'm doing this, I feel like I'm playing a major role in their survival. I'm excited about that.''