By John Gibb
0 Comments
Yes, at the moment you can actually learn a good deal about medieval sword fighting at Otago Girls’ High School.

Being able to wield a sword proficiently, and undertake other choreographed and safe forms of unarmed combat could mean positive future job prospects for drama pupils at the school.

Having started the programme last week, Mr Sehgal (40), who moved from Auckland to Dunedin last year, planned to offer about eight more sessions in the first term. 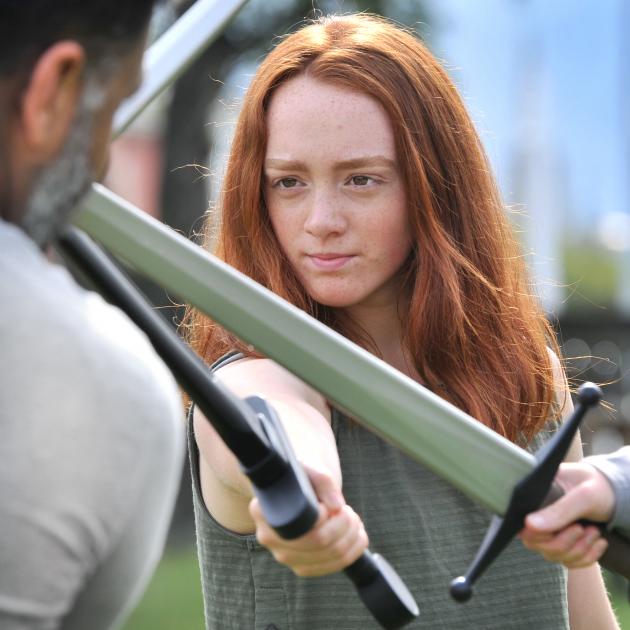 About 12 had taken part in last week’s sword fighting lesson.

"It’s a little different from our usual course work," she said.

The skills the year 12 and 13 pupils were learning would be incorporated in performances of scenes from Shakespeare plays later in the year.

Mr Sehgal had a very wide range of skills: he was an experienced martial artist and swordsman whose martial arts interests began at the age of 6, and was also a choreographer, fight director, scriptwriter, and web designer.

He would be developing pupils’ skills in choreographed fight sequences for theatre and film, and passing on a variety of skills and procedures, including how to maintain safe practices.

Mr Sehgal said that learning theatrical combat skills could prove lucrative and positive for drama pupils in the future.

The skills had links not only to potential film and television work, but also to "motion capture" techniques used in the huge animated world gaming industry, which was becoming increasing accessible to New Zealand.

Year 12 drama pupil Sophia Niblock was delighted to be participating in the workshops, including wielding heavy practice swords.